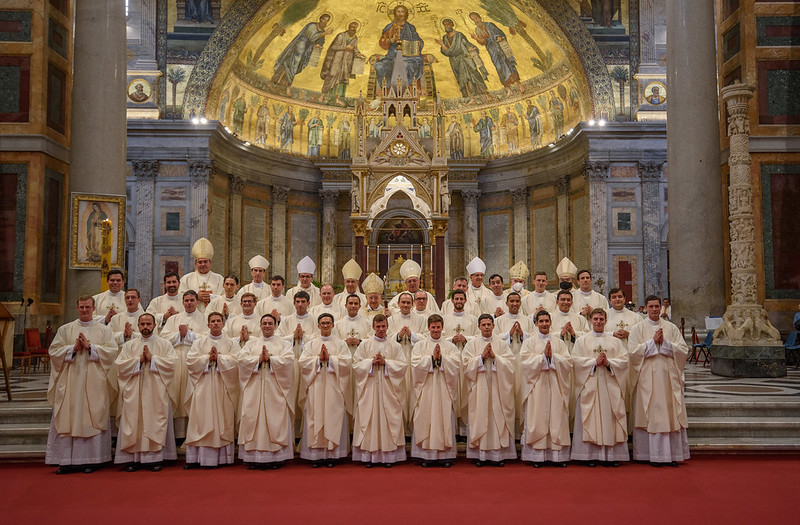 On May 7, 2022, after two pandemic years which precluded the Congregation from holding their traditional annual ordinations as a cohort in Rome, Cardinal Giuseppe Bertello ordained 28 priests of the Legionaries of Christ in the Pontifical Basilica of St. Paul Outside the Walls.  The return to the Eternal City was a welcome event and a celebration of God’s call to follow him in total self-giving through the priesthood.  The new priests are from Argentina, Germany, Brazil, Chile, Colombia, South Korea, Italy, France, the United States, and Mexico. Nine other transitional deacons in the order are being ordained in separate ceremonies in dioceses around the world, for a total of 37 new Legionary priests ordained this year. 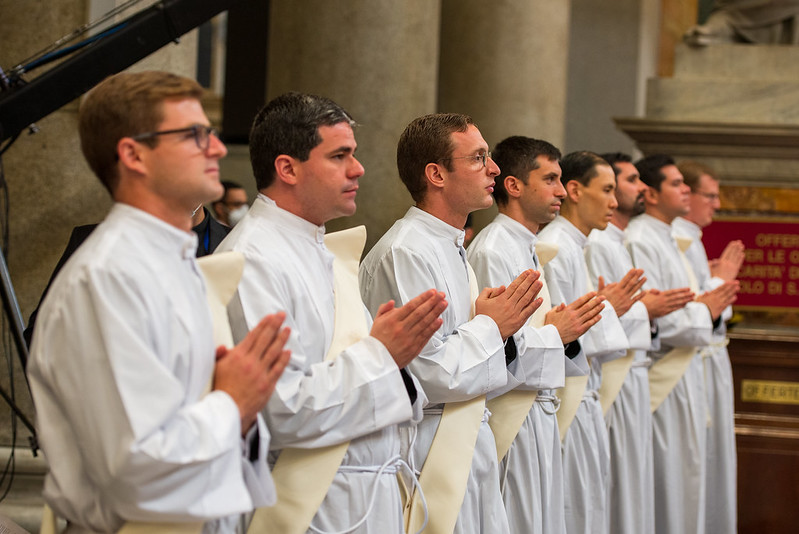 Some of the Legionary deacons in their final moments before ordination during the Mass on May 7, 2022.

Seven new priests from the order’s North American Territory were ordained during the Mass, including six from the United States and one from South Korea:

Deacon Robert Antonio, LC, assisted at the Ordination Mass. He will be ordained to the priesthood on July 30th in the United States.

The Ordination Mass was concelebrated by 9 bishops and 150 priests, and attended by over 2,000 people including family, friends, and members of ECYD and Regnum Christi from all over the world. During his homily, Cardinal Bertello assured those present that “our joy is, above all, an expression of joy and gratitude of the Church to the Lord for having called these young people to consecrate their lives to Him and that today counts them among her ministers.”  He mentioned the priestly prayer in chapter 17 of John’s Gospel to remind future priests that “the consecration of Jesus is, above all, a separation from the world, which makes it the exclusive property of the Father, and a sacrifice because he gives himself to the Father by offering himself as a victim on the Cross.” He also exhorted the new priests to understand that, “Our consecration is not for us, but for those to whom we are sent, to transmit and communicate to them what we have received so that, following in his footsteps, with his same love and obedience, his Word may bear much fruit and with the grace of the Holy Spirit reach the ends of the earth through our preaching and the witness of our lives.”

Father John Connor, LC, General Superior of the Congregation, reflected, “As General Director, it fills me with hope to see these brothers of ours come to this moment. I thank God and congratulate each one of them, their families, and their formators – and I pray that the gift they receive today in ordination may become fruitful throughout their priestly ministry” 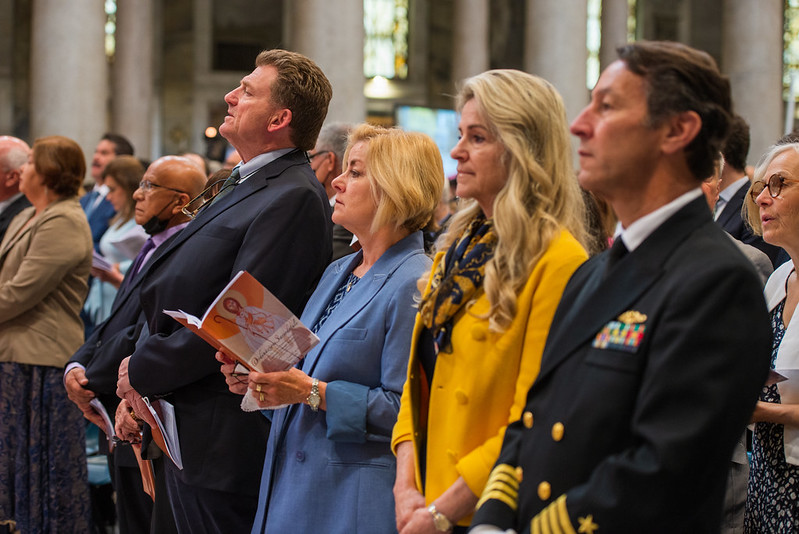 The parents of new priests Fr. Luke Rawicki, LC, and Fr. Adrian Lawrence, LC, attend their sons’ Ordination Mass in Rome on May 7, 2022.

Following the Ordination Mass, the Legionaries of Christ hosted a lunch reception for the families of the new priests at their seminary in Rome, the International College of the Legionaries of Christ, where all Legionaries complete their formation in Philosophy and Theology before ordination. The next day, each of the new priests celebrated their first masses at churches, chapels, and basilicas around Rome, with their brother Legionaries, other Regnum Christi members, family, and friends from around the world in attendance.

Father Savio Zanetta, LC, rector of the theology community at the General Directorate, pointed out that this celebration “is like a breath of fresh air amid what we have lived with the pandemic, the war in Ukraine, and the humanitarian crisis that all this has created. The ordinations are a visible way of showing us how God wants to bring his word, comfort, and mercy to many people through these new priests.”

The Legionaries of Christ, who are members of Regnum Christi along with other lay consecrated men, consecrated women, and lay members, spend an average of 12 to 14 years in formation before reaching the moment of their ordination. During these years they prayerfully discern the vocation God has in mind for them. They are educated in the Humanities, Philosophy, Theology, and through apostolic internships in different countries around the world. The map of the Legionaries’ formative journey as a congregation is contained in a document called the Ratio Institutionis, entitled “Christus vita vestra.”

The rector of the International College of the Legionaries of Christ in Rome, Father Christopher Brackett, LC, referring to the newly ordained, said: “We lack words to express what we experience in every priestly ordination, the mystery, the gift, the generosity of those who are ordained, but also of their parents in placing in the hands of God the vocation of their children. Today our hearts are filled with joy, and it is a great happiness to see them arriving at the altar, prostrating themselves before God to receive ordination. It is a mystery of grace.”

Relive the sacred beauty of the Ordination mass by watching the recording, available here, or through the photo gallery of the event. Read the full English text of Cardinal Bertello’s homily here.