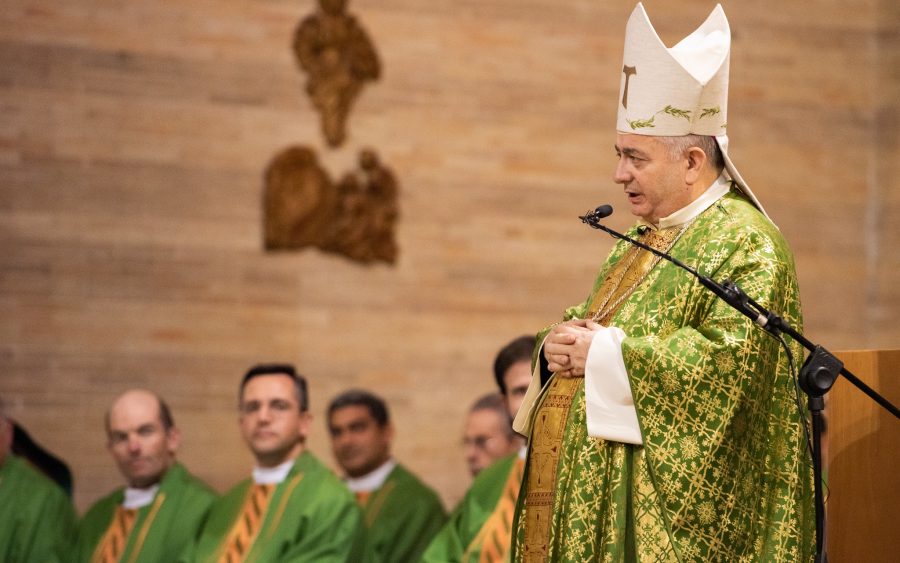 After the election of the new government, the Chapter fathers focused their efforts on work in commissions, revision of legislative texts, considerations regarding the Regnum Christi Federation, and drafting documents regarding sexual abuse of minors.

Last Wednesday, February 12, two presentations were given to complete the General Director’s report of the last six years: Fr Jesús Villagrasa, general councilor, gave the update on schools, while Viviana Limón, general councilor of the Consecrated Women of Regnum Christi and head of the department for Regnum Christi life and mission, spoke about the apostolic work, ECYD, and RC sections, highlighting opportunities and apostolic priorities for the next government of the Regnum Christi Federation.

Archbishop José Rodríguez Carballo, OFM, secretary of the Congregation for Institutes of Consecrated Life and Societies of Apostolic Life, presided over the Eucharistic concelebration on Thursday, February 13, and joined the Chapter fathers for dinner. In his homily, he insisted on the three pillars on which all the General Chapter reflections should be based: the gospel, our own charism as reflected in the Constitutions, and the signs of the times. Regarding the topic of abuse of minors, he invited the Chapter fathers to have clarity in their discernment as an institution and boldness in implementing the necessary measures.

On February 14, Father David Boix, LC, passed away at 85 years old. Many Chapter fathers went to the International College in the afternoon that day to the participate in the wake, and to concelebrate the funeral Mass on the following day.

Among the Chapter fathers, there is a feeling of having made progress on the most urgent tasks. In addition to finalizing pending resolutions, the next weeks will be focused on addressing other aspects of the life of the Congregation that are of particular interest, as indicated by the contributions received from both the territorial assemblies and from individual Legionaries.