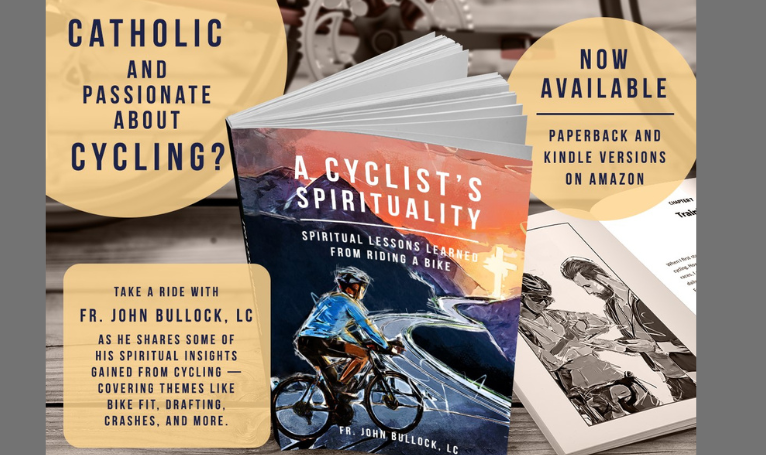 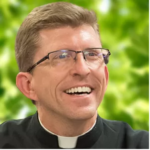 Recently, Fr. John Bullock, LC, published his book A Cyclist’s Spirituality – Spiritual lessons learned from riding a bike. “I have had a strong interest in cycling since I was 14 years old. … I participated in some local races in my teens and I wanted to become a professional cyclist but my knees put an end to that dream…” comments Fr. John in an interview with the Regnum Christi International Communication Office.

Who is Fr. John Bullock, LC?

I grew up in Houston, Texas, and I am an only child. My mother is originally from Austria and my father, now deceased, from Texas. They met in Houston and I lived there for most of my childhood.

Since I was 11 years old, I remember thinking about the priesthood, but I didn’t discover the Legionaries of Christ until shortly after college. I entered the Legion in 1992 in Cheshire, CT, but since I can speak German, I did my novitiate in Germany, later I did my humanities studies in Salamanca (Spain), and my apostolic practices in Germany and Poland.

I was ordained in 2002, and have worked in California, Cincinnati, and now in Houston. I have worked with youth, in a university, and in Regnum Christi ministries. I can say that I love my faith, my priestly vocation as a Legionary at the service of the Church, and my entire Regnum Christi family. I like working with people, and I love riding my bike. 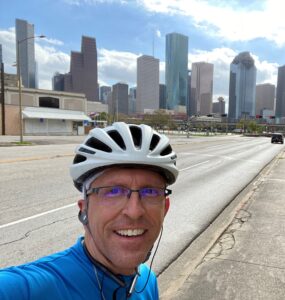 Where did the idea of equating spirituality with cycling come from? And why cycling and not athletics, swimming, or some other sport?

I have had a strong interest in cycling since I was 14 years old, initially desiring to tour Europe. However, my interest quickly turned to racing. I participated in some local races in my teens and wanted to become a professional cyclist. Eventually my knees ended that dream, but the passion for cycling continued.

Once I got into the Legion, I thought riding a bike was to be a long-lost love. But 12 years ago, I tried to ride a bike again, and to my delight, I was able to ride a bit. Now I try to ride my bike regularly, around 3 times a week.

Not everyone can cycle, right? Do you think that cycling is a sport that anyone can do? And applying it to spiritual life, how do you associate this aspect of sports discipline, for example, with prayer?

I do believe that anyone who wants to can ride a bicycle; but cycling as a sport is growing primarily in the United States. Many people have been infected with this passion for cycling, be it mountain or road. You don’t have to formally compete to be an avid cyclist. Around here you see people of all ages riding bikes and many do it with passion and dedication.

From my perspective, two millennia ago Saint Paul already saw the connection between sports and the spiritual life, pointing out that our spiritual journey, like a foot race, implies a goal, an effort and the need for discipline (cf. Cor 9, 24-25). I think the comparisons are innumerable. This book shares some spiritual insights gleaned from a cyclist’s point of view, covering topics such as bike fit, drafting (when a rider saves energy by trailing another rider in a low pressure zone), crashes and accidents, and other aspects.

Is the book aimed at a specific audience? Is it for an ordinary Christian, those who only go to Mass on Sundays, or for those who already have a specific journey or a vocation in the Church?

While I’ve heard a number of non-cyclists say they’ve liked my book, the primary audience is avid cyclists. Statistically speaking about 23% of those cyclists in the United States will be Catholic. The hope is to help those people who are passionate about cycling to see the connection with the faith. Most of these people will be lay people, but I have also received a positive response from some of my fellow Legionaries of Christ.

In your pastoral dealings with people, what difficulties do you see in the spiritual life that prevent serious work, discipline, or creating the habits needed to live a spirituality?

I have worked pastorally with people of all ages, and I have noticed that a great obstacle to living the faith is a lack of discipline. There is a lack of consistency in the life of prayer, in a life program and even, sometimes, in the experience of the sacraments. This subgroup, passionate cyclists, will have no problem with willpower. You can’t be a serious cyclist without the willpower to train regularly. Here the underlying issue will be to awaken that same passion for faith as they have for cycling.

What would you say to those who say they simply don’t have time for the spiritual life, or who see it as something outdated?

When someone experiences the love of Jesus Christ through prayer, Eucharistic adoration, or some other spiritual or human experience, then the motivation will come from within the person, from the heart. And you find time to spend with the person you love, without excuses.

The book A Cyclist’s Spirituality – Spiritual lessons learned from riding a bike by Fr. John Bullock, LC is available in paperback and kindle format, and can be purchased here.