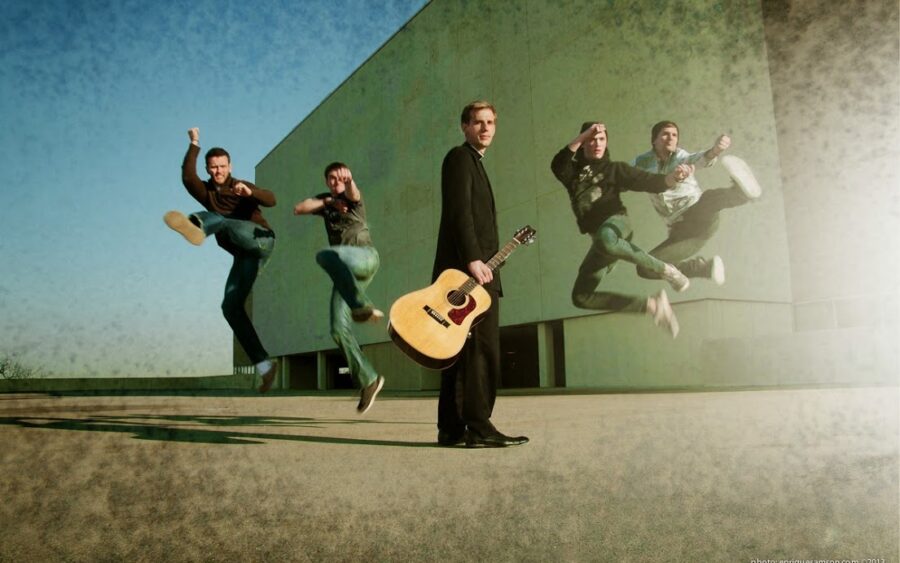 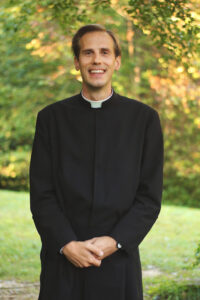 You wouldn’t know it from watching him perform, but for most of his young adulthood, Father John Klein, LC, had a love-hate relationship with music. “Some days I wanted to quit music and never play again,” says Father John, “and other days I dreamed of doing nothing but music for the rest of my life.”

Certainly, by the time Father John was in his sophomore year in college, he was already well on his way to living out his dream of becoming a rock star and living a life of fame and adventure. His band, The Dance Commanders, had just performed at one of the biggest parties on campus, and the show could not have gone better. But despite the thrill of playing in front of a large crowd of college students, and despite executing the perfect knee slide across the stage while the chords of his favorite song rang out on his guitar, something was missing. “When the initial excitement and thrill of the night had subsided and the crowd had faded away, I began to feel very dissatisfied with the whole affair,” says Father John of his initial steps towards fulfilling his dream of musical stardom. “I remember thinking… ‘Now what?’”

A move to Nashville to pursue a degree in music production did little to quell the disquiet and increasing restlessness he was beginning to feel about his dream of a career in music. In the midst of this unrest, he made a desperate midnight prayer of surrender to God, which started him on a different path to a new adventure; over the next several months, he would discern what new direction God was calling him in, and would decide to enter the seminary to become a Legionary of Christ. 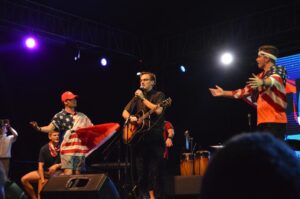 And what happened when Father John surrendered his dream of a career in music, and instead, handed over his guitar to Jesus? Jesus handed it right back.

It wasn’t until Father John relinquished his dream of becoming a music professional, and replaced it with the vocation of becoming a priest, that he finally found peace, not only with his purpose in life, but also with his relationship with music. “Only once I discovered I had a vocation to the priesthood did music finally find its rightful place in my life,” says Father John, “Once I realized that music was a God-given gift for me to help evangelize, instead of an end in itself, I finally was set free.”

Undoubtedly, Father John has been putting his God-given musical gifts to good use, and he’s seen no end to the opportunities to use his talents and passion to inspire and evangelize. In addition to performing music, Father John performs and writes original songs that are featured at a variety of events, from local retreats and missions to international festivals. It was at one such festival, in Salzburg, Austria, that Father John realized the reach and impact that his music could have on those around him, and on those he’d never even met:

“Playing on the streets of Salzburg, Austria at a youth festival with eight other Legionary brothers a few years back, a young Austrian kid I had never met recognized me and approached me, thanking me for one of my songs, which a friend of his had shown him during his study abroad year in Washington, D.C. The song had helped him through a difficult moment.”

Of all the events that Father John has had the opportunity to participate in, his favourite are the missions that occur in his local area throughout the year. Each December, he leads a Christmas Carol Mission, where about a hundred University of Georgia students sing Christmas carols and do street missions in downtown Athens, Georgia. And every year, Father John writes a new theme song and leads the music for the Atlanta Mercy Missions, an annual mission held by the ECYD and RC Youth in Atlanta during Holy Week. “My mission is to use music to help others experience more deeply the goodness and peace of Christ as it leads to prayer,” says Father John, “and at the same time [experience] the energy and life the risen Christ brings as he sends us out to mission with and through him.” 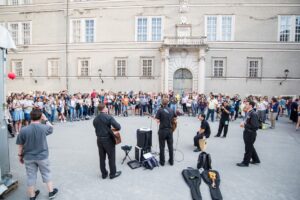 Father John has found that music, as a form of true beauty and a source of joy and pleasure, has been a real method of communication and evangelization in his priestly vocation. “Music is a chance to evangelize through beauty, which wins hearts in a subtle yet powerful and disarming way,” says Father John. “I feel, especially, that through my music, I want to express the beauty of encounter with the person of Jesus Christ.” This beauty of encountering Christ is, Father John feels, what people are seeking when they feel that restlessness he felt as a young adult as he wrestled with his own future plans and his purpose in life. “People today are always looking to feel something,” says Father John. “Music helps us not just hear of the power of Christ in words, but also to feel it, in a certain sense, in our emotions and our heart, too.”

The power of music to both inspire and ignite, as well as console and calm, was especially important during Holy Week and Easter this year, when Catholics across the world were dealing with the crisis of the COVID-19 pandemic, and doing so without hands-on access to the sacraments. The online Easter World Tour was an apostolic initiative that allowed Legionaries to pool their musical talents and put them at the service of the Church. This four-part concert series was streamed on the Regnum Christi YouTube channel, and featured four nights of live music from various Legionaries in several different locations across the world, including Father John, from his living room in Atlanta.

With in-person ministry severely limited during the COVID-19 crisis, Father John and other members of the Regnum Christi family have been further inspired to seek creative ways to use their musical gifts to minister and evangelize remotely. Recently, various Legionary priests and Consecrated Women of Regnum Christi, in response to Pope Francis’ urgent call to unity in prayer during a time of global uncertainty and suffering, have come together to form virtual choirs, in the desire to provide consolation and hope through their music. And when it was clear that this year’s Holy Week Mission in Atlanta would not be going ahead as planned, at least not in its usual form, Father John helped organize a virtual Mercy Mission. Creating and performing choreography to accompany his original Mercy Mission theme songs gave high school students across Atlanta a way to connect with each other during a time of social isolation. “Music for me has been a very powerful tool to help bring people together, help spread joy and hope, lead others to prayer, and help inspire and lead others to love being missionaries,” says Father John. “Through music, I feel I can help people experience a bit of the powerful and energizing yet beautiful and hope-filled experience of Christ that I have had.”

Father John’s newest initiative will see him making music in Nashville after all: at the end of June, he’ll be part of a group recording an album of the best Regnum Christi Mission songs, to help continue to spread Christ’s message of joy and hope, and the call to mission. “We need fresh, new and energizing music to inspire people to be fearless missionaries to Christ!”

To hear Father John’s original music, visit and subscribe to his YouTube channel, or see him perform his newest Mercy Mission song, called “Leave Your Mark,” accompanied by Atlanta youth missionaries here. You can also find his performances with the Legionary virtual choir, and with the Regnum Christ family choir on YouTube.