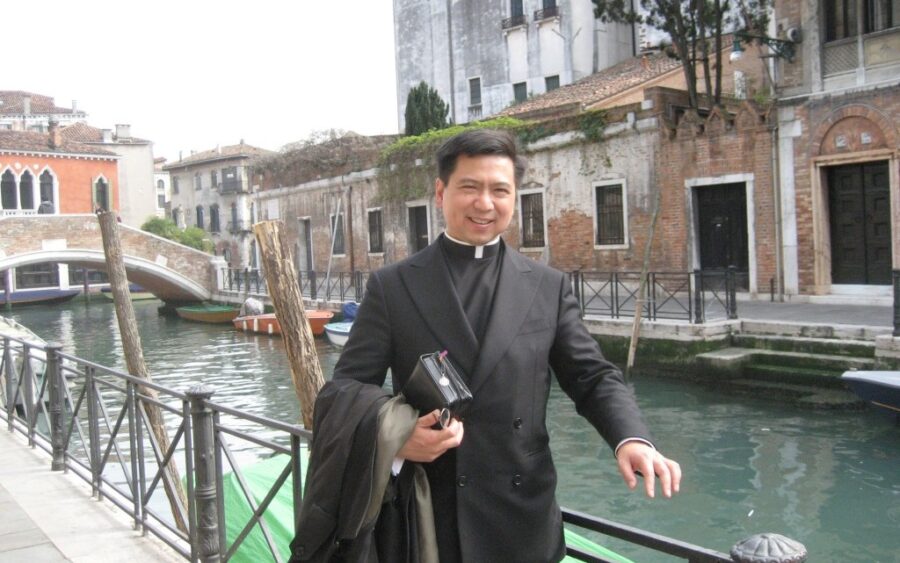 For Fr. Joseph Tham, LC, growing up in Hong Kong – where Christianity was, and still is, a minority religion trailing well behind Chinese folk spiritualities, Confucianism, Buddhism, and Daoism – heightened his sense of belonging to the Catholic Church and his desire to respond to his baptismal call. It was this environment that allowed him to become more conscious of what it means to be a Catholic, more so than if he had been brought up in a predominantly Christian country. As a result, he was very much aware from a young age of the need to do something for Christ in his life.

When he was 15 years, old, Fr. Joseph immigrated with his family to Canada, and after high school, he began to pursue a science degree in mathematics, ultimately graduating from medical school and becoming a general practitioner. While still in medical school, Fr. Joseph felt a strong call to serve the suffering, in imitation of the God who had suffered for him. As a medical student, he began going on medical missions to Tanzania, Africa, and planned to become a medical missionary.

After graduation, Fr. Joseph worked as a general practitioner for four years, and was relatively satisfied with his medical career and the lifestyle that accompanied it, but he couldn’t help but wonder if God was asking something more. While treating the sick, it became apparent to Fr. Joseph that many of his patients were in need of not just physical healing, but spiritual healing as well. Fr. Joseph felt called to step away from his practice to follow God’s call, but the decision wasn’t easy. “I felt like the rich young man in the Gospel when I felt God’s call to sell all and follow him.”

In March of 1994, Fr. Joseph made a visit to the Legionary seminary in Cheshire, Connecticut, and it was then and there, during celebrations of the Feast of St. Joseph, that he decided to end his practice, tie up any loose ends, and attend the summer candidacy program in June. As the only son in his Chinese family, Fr. Joseph was expected to care for his parents in their old age and to carry on the family name, so his decision to become a priest was met with great resistance, particularly from his father.

Despite his family’s opposition, and his own temptations to return to his medical practice, Fr. Joseph was ordained a Legionary priest in 2004. Because of his background in medicine, he began to study bioethics, and in 2007 he obtained his PhD at Regina Apostolorum Pontifical University in Rome. Since then, he has taught bioethics in Rome as well as at the Holy Spirit Seminary College of Theology and Philosophy in Hong Kong. He also presents at conferences and courses, and is a prolific writer and editor of numerous articles and books on the topic of bioethics, and the important harmony that exists between the divine and the human. 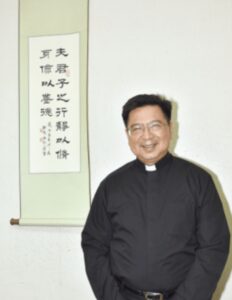 However, Fr. Joseph has taken an entirely new approach to presenting that harmony between heaven, earth, and humanity in his newest book, Art for God, Artworks and Spiritual Reflections. Besides being a former medical doctor, a Legionary priest, and a professor of bioethics, Fr. Joseph is also a sensitive artist of Chinese calligraphy, seals, and watercolor paintings. His new book explores the compatibility of the two cultures within which he was raised: Chinese tradition (including Confucianism, Buddhism, and Daoism) and Christianity and Catholicism.

One of the best examples of this compatibility is illustrated in a seal carving that Fr. Joseph created called “The Harmony Seal,” which depicts the incarnation of God. Chinese seals, typically carved out of stone and then dipped in red ink, have been used for over 2200 years to stamp important documents, contracts, and artwork, and have now become pieces of art in their own right. In Art for God, Fr. Joseph explains the significance of “The Harmony Seal”: 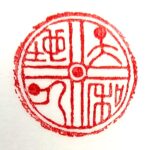 “The symbolism of this seal carving is taken from a traditional round shape design. The ancient Chinese words for ‘Heaven’ and ‘Man’ have the same root that looks like a stick figure of a human being. This design emphasizes that from Heaven, God becomes man in his incarnation. The kneeling posture of man represents God’s kenosis, the self-emptying of Jesus. When you look carefully, the three round dots symbolize the mystery in the Trinity. The partition of the seal is in the shape of a cross, reminding us that we are reconciled to God through the Paschal mystery. The circle is a symbol of unity and harmony. The circular seal is the size of the communion bread, the Eucharistic host that is the spiritual food that sustains us in our journey towards this ideal of universal harmony.”

“The Harmony Seal” was created by Fr. Joseph in the early months of 2020, at the beginning of the COVID-19 outbreak and following months of social unrest in Hong Kong; for Fr. Tham, the division caused by these events demonstrated a need for reconciliation with nature and with God, and a return to harmony. He recently presented this and other pieces from his book in an exhibition at the Fringe Club, a contemporary art space in Hong Kong, in January of 2022.

For Fr. Joseph, the art that he creates is always a representation of his relationship with God, and his book, Art for God, is a reflection of his artistic journey of painting, calligraphy, and seal-carving, and how his art informs and is informed by his faith. The book, therefore, is not simply a collection of art pieces, of which there are plenty, but also a spiritual diary; each creation is accompanied by a reflection on the inspiration or message behind the piece. And the thread that runs throughout all the art pieces and their accompanying reflections is one that runs throughout Fr. Joseph’s entire life: a story of how the influence of Chinese literature, poetry, philosophy, and spirituality resonates and dialogues harmoniously with his Christian faith.

Fr. Joseph believes that one the greatest ethical problems in today’s culture is the desire to own, consume, and to dominate, rather than to seek harmony with all things. “It is my prayer and my hope,” says Fr. Joseph, “that this book will elevate the spirit and touch that which is transcendent, that which is beyond, that which is our heavenly home, and that which is God.”

You can find out more about Fr. Joseph’s exhibit and his book Art for God, Artworks and Spiritual Reflections here, and purchase his book, which is written in both English and Chinese, at creationhub.ltd.