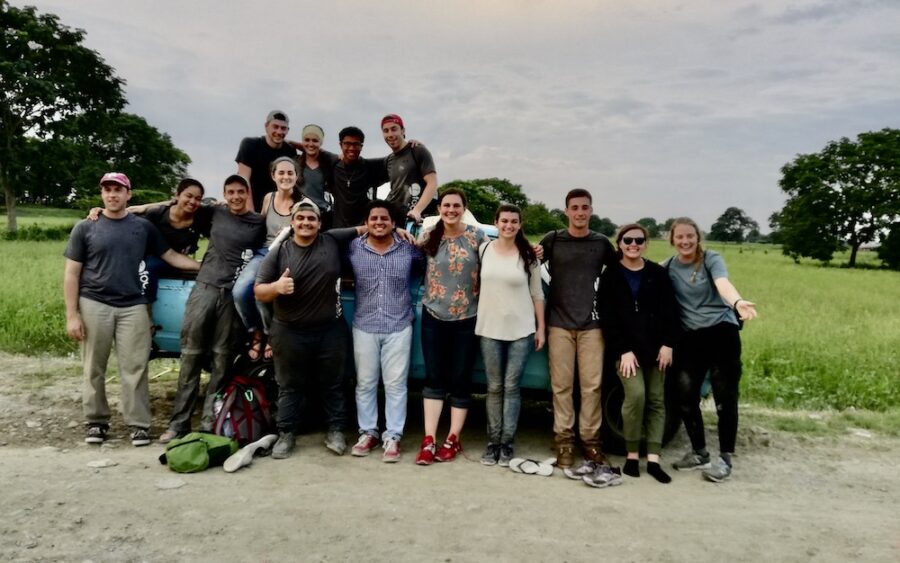 When Father Michael Moriarty, LC, left with a group of young missionaries to rural Ecuador at the beginning of March, they arrived in the middle of a monsoon. When they left just ten days later, the world was in the midst of a pandemic.

During the first week of March, Father Michael accompanied several Philadelphia area students on a mission organized by FOCUS, a Catholic collegiate outreach organization, into rural Ecuador. Upon their arrival, the region received a monsoon rain and the church where the group would be staying, Santa María de Laurel, was under one to two feet of standing water. “The students just stepped up and adapted to the situation,” says Father Michael, “it was kind of roughing it the first couple of nights.”

Nonetheless, the group, consisting of about fifteen missionaries, was warmly welcomed, by both Father José, the priest at Santa María de Laurel, as well as the members of the community that the group had come to serve. In the Ecuadorian countryside, along the banks of the Daule River, the missionaries helped to build a wall and gate for the rural school, to provide a sense of authority to the school structure itself, and accountability to the students who come and go. “The students that go to that school are in a cycle of poverty that’s somewhat severe unless they get a good education,” says Father Michael, “and something as simple as a wall can change the dynamic of education for a generation.”

Each day, while one half of the missionary group worked with members of the local community to build the school wall, the other half would visit the homes in the surrounding rural area to talk and pray with the local families, who received the missionaries with warmth and curiosity.

One of Father Michael’s main roles during the mission, besides acting as translator and hands-on laborer, was to provide daily adoration, confession, and mass; one day, he celebrated mass at the rustic chapel in the countryside, giving four children from the surrounding rural community their First Communion. He also provided spiritual mentoring for the students, offering spiritual direction for three to four hours a day, usually while walking the dirt roads that led from the school to the rural homes they were visiting. Besides celebrating the sacraments daily, Father Michael considers the offering of spiritual direction his most important role as mission chaplain: “At that age, a lot of students are discerning their vocation, so it’s a really key moment.”

On the last day of the mission, the group hosted a dance party at the rural school, complete with music, loudspeakers, and ice cream, as a way to bring the community together, but also, as a way to say good-bye. “They just totally welcomed us, they basically just adopted us, you become best friends for a week,” says Father Michael of the mission group’s relationship with the local community, “and it’s pretty tough for a lot of the younger kids from the area to say good-bye to these missionaries that they look up to and admire, and know they’ll probably never see again.”

However, as the ten-day mission was coming to a close, there were indications that concern about the COVID-19 pandemic had reached Ecuador. Father Michael noticed subtle signs that some of the townspeople were becoming wary of the missionaries, who they feared might have brought the virus with them, to a region of the country where there may not be the required access to health care required should an outbreak occur. Upon their departure, the airport in Ecuador was quieter than it had been when the mission group had arrived just a little over a week ago, but it wasn’t until they landed in JFK Airport that the scale of the crisis became apparent. The usually crowded airport was eerily empty. Once in New York, the group scrapped their original plans to stay overnight in a hotel and celebrate mass in the morning as a way of concluding their mission, and immediately headed back to their homes.

“We all knew that getting back would be really different,” says Father Michael. Since most of the students did not have cell phone service while in Ecuador, near the end of the trip, the mission organizers began to inform them about what was happening around the world, and particularly, back home. “All the universities had cancelled classes for the rest of the year,” says Father Michael. “We started to tell everybody ‘hey, this is what were going back to.’”

For the most part, the students took the news in stride. “A couple of them were pretty nervous about it, and upset that their semester had stopped,” says Father Michael, when the students realized that they wouldn’t be graduating on campus with their classmates. But other than that, the students recognized that returning home to a world that looked different than the one that they had left was just like embarking on another mission. “It was more like, we’re missionaries,” Father Michaels says of the students’ adaptive and apostolic attitude which they arrived with, and further cultivated, in Ecuador, “and this is part of it.”

In fact, Father Michael hopes that it’s this apostolic attitude that stays with the students long after they’ve returned home from their mission abroad, which he says is meant to be merely “a kick-start.” “It’s like an interactive, fun adventure, that by the time you’re half way through it… you realize you’re meant for so much more,” says Father Michael. “I think going on a trip like this awakens the awareness that my faith is needed by others, and my gifts and talents can be used at the service of the Church.”

The biggest task Father Michael faces once he returns from a mission is finding ways to harness the excitement and adventure of serving Christ overseas, and bringing it back home. “Some of that joy and enthusiasm, and the spirit of initiative – it fizzles out,” says Father Michael, who seeks to build a culture and organizational structure that captures all the energy and experience of encountering Christ in the mission, and then channels it into team life and local apostolate. “This mission experience is meant to circle back to a longer term follow-up of at-home mission,” says Father Michael, “the Encounter with Christ, Bible study groups, team life, spiritual direction, retreats on a regular basis, and missions locally.”

Bringing that experience of mission down to a local level has become increasingly important in Philadelphia, particularly during the COVID-19 crisis. “The last four weekends, we’ve gone on missions here in Philly, adapting it to the needs of the homeless, and what we can do in a safe way,” says Father Michael. During Holy Week, he sent out an e-mail requesting packed lunches, hoping to collect a couple hundred lunch bags to hand out on Divine Mercy Sunday. “When I came out that afternoon, there were seven feet of boxes with sandwiches, probably two or three thousand lunch bags, with Divine Mercy prayers inside.” Each Saturday since, Regnum Christi Philly has been delivering two or three truckloads of packages containing lunches, toiletries, and socks to the local people in need.

This is precisely the spiritual souvenir that Father Michael hopes the missionaries bring back from their mission trip abroad; upon arriving home, “we have to then bloom where we’re planted.” “You don’t have to go far away from home to be a missionary,” says Father Michael. “In fact, that might be even long-term hypocritical, to love somebody far away from you, and not to love the one at your side, in your family, at work, at school.” For Father Michael, the mission he lives at home, in his daily life, is the one that matters most. “I would be remiss in living my Catholic faith if I didn’t do that, if I wasn’t a witness at the grocery store.”

Going on a mission abroad is a life-changing apostolic adventure that Father Michael believes every young person should experience. “I love to take students on these missions,” says Father Michael, “because once that awareness is made, then we can realize that there are people in Philly who need these missions here.” He’s hoping to build a mission culture that forms apostles who don’t abandon the mission when they return from abroad, but instead, bring the mission back with them, and continue it at home.