Constitutions of the Legion of Christ approved 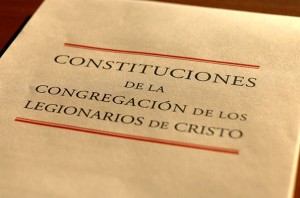 director of the Legion of Christ, announced in a letter to the Legionaries of Christ that the Holy See has approved the Constitutions of the congregation.

In his letter, Fr. Eduardo invited the Legionaries to “be grateful for the paternal care with which Popes Benedict XVI and Francis and Cardinal De Paolis and his councilors have guided our congregation’s steps in these years.”

The approval letter was signed on October 16th by Archbishop José Rodríguez Carballo, OFM, and Fr. Sebastiano Paciolla, O. Cist., respectively secretary and sub-secretary of the Congregation for Institutes of Consecrated Life and Societies of Apostolic Life. The new Constitutions are in force.

This approval fulfills one of the principal objectives of the renewal process that Pope Benedict XVI began in 2010, naming Cardinal Velasio De Paolis as Pontifical Delegate, and which Pope Francis has continued. The text is the result of a 3-year period of consultation and reflection in which all Legionaries had the opportunity to participate and contribute. Cardinal De Paolis’ task as Pontifical Delegate culminated with the Extraordinary General Chapter of the Legion of Christ, which was held in January and February of this year.

In his letter, Fr. Eduardo Robles-Gil said: “We now have the text of our Constitutions in our hands. As the path that will guide us to holiness and apostolic fruitfulness in serving the Church and men and women, they describe the specific way each of us should live religious life in the Legion.”