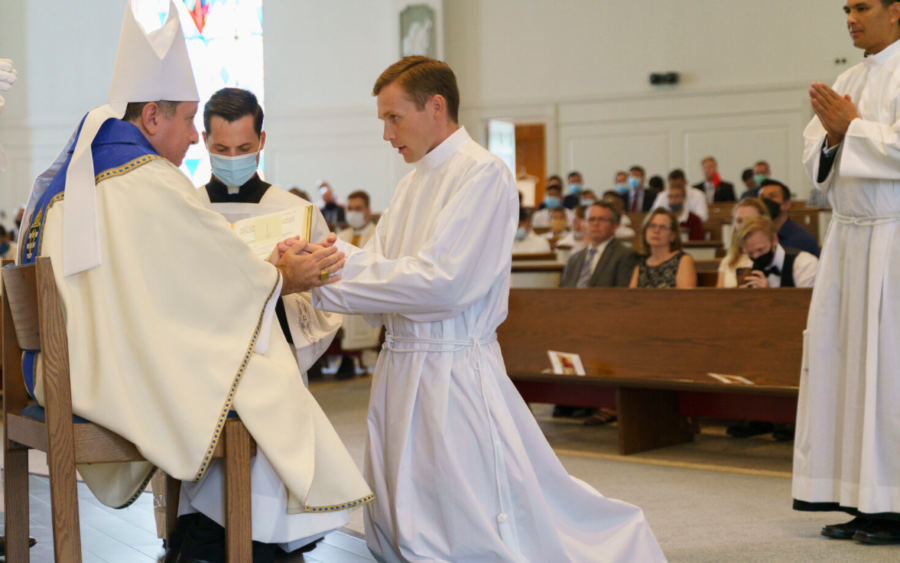 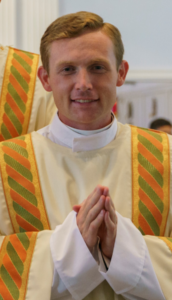 Deacon Michael Sester will be ordained to the priesthood on Saturday May 29th, 2021 at 2:00pm EDT, at Holy Vietnamese Martyrs Catholic Church in Atlanta, Georgia.  He shares his testimony below.

Ok, so this is how I remember it:  I was in Eucharistic Adoration at our parish in Rogers, Minnesota, and I was praying and thinking about my future.  I wanted to live a simple, normal, uncomplicated life, not filthy rich, not poor, have kids and be very close to people I love, the life of a good dad.  I was eleven at the time, I think.  Then I looked up at Jesus in the Eucharist and I said in summary of all that, “I’m going to be a priest.”  If that didn’t make sense to you, it made even less to me at the time, but I said it in such a definitive way, and it was so out of the blue that my thoughts froze.  I looked at him, there was a long pause, and I thought, “What the heck? No! Please!”  He didn’t react.  So, I felt kind of stuck with that, though it wasn’t a completely negative feeling either.  I felt like he was looking at me in a very deep, penetrating way.

After that, there was a long struggle.  I didn’t want to be a priest, but “You don’t tug on superman’s cape, you don’t spit into the wind, you don’t pull the mask off that old lone ranger,” and you don’t say no to God.  I tried so hard to forget or to discredit that moment, but I just couldn’t and it’s hard to explain why.  I remember telling a classmate that I wished I could just die so that I wouldn’t have to decide to go to the seminary.  It was a little over dramatic, but I did fight with that decision for a couple years.  When the song, “I the Lord of Sea and Sky” came up at mass, I wouldn’t sing the part that says, “I will go Lord”.  I randomly and emphatically told my mom that I wasn’t going to the seminary.  Looking back, it’s incredible how God takes the deepest desires of our hearts and knows how to transform them and fulfill them in deeper ways than we can imagine, if we let him drive.

I did end up in the seminary obviously, but at the same time, I wasn’t totally sure about my vocation.  After a few years of seminary, I remember being frustrated with God and begging him to just tell me if he really wanted me to be a priest.  Other people left the seminary, and I was jealous that they knew it wasn’t for them and I didn’t know for sure that it was for me.  If he would just tell me then I could just say yes, even if I didn’t like it.  God doesn’t work like that.

So then what?  This all could sound a little negative, but God was digging deep in my heart and I had good people around me to help me walk forward.

There was an important moment during my last year in Cheshire (4th year of major seminary) when I was thinking about married life a lot and it really pulled on my heart since it is such a good and beautiful thing.  I went to my superior’s office and talked about it for a long time.  I pushed and pushed until he said, “Alright let’s start talking about it.” He meant talking about my vocation as possibly being marriage and a family.  It kind of stunned me.  I think I needed to hear that, because I realized that part of me, a deep part, did want to be a priest and that it wasn’t so easy to just throw it all away.  Normally people talk about throwing it all away to enter the seminary, but something in that moment turned all that around.  It’s like the door opened for me to leave in peace, (It was always open.  Don’t get me wrong.) and I looked out and closed it slowly but this time because I wanted to and not because God wanted me to.

Another important moment came during spiritual exercises in my last years of theology before my perpetual profession of vows.  There was a moment in prayer where I felt very free.  God wasn’t forcing me to do anything.  He could fill my life with meaning just as well as a married man and no hard feelings whatsoever.  I realized then that he didn’t just tell me in my moments of doubt, because he wanted me to choose out of love.  God respects our freedom.  His love is too great to let us feel coerced.  He invites, then we decide.

Later, during the same spiritual exercises (they lasted a month), I was in the chapel going through all the worst-case scenarios of priestly life and trying to find solid ground to stand on for the rest of my life.  I remember looking at Jesus on that big cross and telling him that even if I had no contact with the people my life might touch, even if I had a desk job and no glory (Yes, some people might like a desk job, but for me it is a horrifying idea.), I would still do it.  I would still love and still give of myself like he did for them.  I would do it for them.  It was something, but it wasn’t solid enough until I felt an interruption in my thoughts similar to what had happened so many years earlier in that adoration chapel, “Would you do it for me?”  Boom.  Mic drop.  I sat there frozen.  (It doesn’t happen that often.) Jesus is a someone, a someone who had been watching me and caring all those years when I had doubted and gone back and forth.  Who was I playing with?  Whose heart was I playing with?  It’s important to him.  It was his way of asking me like he asked Peter, “Do you love me?”  It wasn’t an accusation.  It was an honest, open question.  I was really talking to someone, so I thought a little bit to answer honestly.  It was this powerful silence when God was listening.  I hope to say “yes” every day of my life.

At my perpetual profession they sang “I the Lord of Sea and Sky”, and through all the emotion I was barely able to sing or at least say that part that meant so much for me, “I will go Lord, if you lead me, I will hold your people in my heart!”

But I skipped a part, Mexico.  I lived in Mexico for two years between theology and philosophy working in a school with adolescents.  It changed my life.  It was like all my desire for fatherhood was filled to overflowing.  And I realized that the priest is called to love with all he is only that he is called to do it with God and with an open heart. Jesus was the face of the Father and the priest is configured to Jesus.  I hope and pray to be able to show God the Father to those around me.  I remember looking at the kids and thinking “God loves you so much! You have no idea! I know it!” It was just that I felt so full in those moments.  Jacques Philippe says it so well:

There are, however, if we are faithful to our mission, moments of grace in which we feel our hearts filled with a very deep love, an immense tenderness for the people God entrusts to us, a paternal, even almost maternal love for them… We feel then that our heart is filled with a love that is greater than us, of which our heart alone cannot be the source. We experience a tenderness and compassion much greater, stronger, and purer than we are naturally capable of. It is God who comes to love in us, who gives us the grace to feel his kindness and compassion for his children.

I will be deeply configured to Christ.  He goes where I go.  He acts when I act even if I am weak, and most of all he wants to love through my love. “As you sent me into the world, so I have sent them into the world… I made known to them your name, and I will make it known, that the love with which you have loved me may be in them, and I in them.” (John 17:18) I think of my hands being anointed with oil, oil that consecrates, perfumes, heals, and illuminates.  Can my hands do that?  I think of his hands inside mine like gloves.  Pope Benedict XVI says:

The Lord has laid his hands upon us and he now wants our hands so that they may become his own in the world… By putting ourselves at the service of his love, they can pass on his divine touch.

So, God knocked at the door of my heart and waited patiently.  Through the years starting from the very beginning, my love for the priesthood grew little by little and took root.  I was a little like Simon of Cyrene.  It is a very powerful thing to understand what it means to be configured to Christ and act in his person as a priest does in the sacraments.  Can there be a greater intimacy than him letting me act in his person so that he can enter the world?  God’s gift is too big for me, but it’s his, so that’s his problem.  I trust and have experienced that God knows best how to fill our hearts to overflowing.