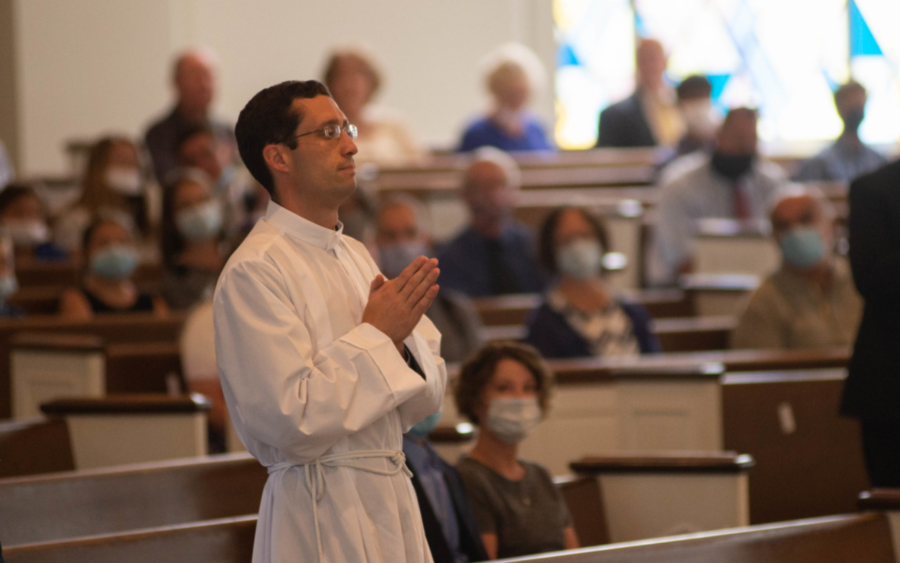 Deacon Seth Sabata will be ordained to the priesthood on Saturday April 10th, 2021 at 10:00am CDT, at North American Martyrs Catholic Church in Lincoln, Nebraska, by Bishop Fabian Bruskewitz.  He shares his testimony below. You can watch the livestream of his ordination here.

“Vocation, more than our own choice, is a response to the Lord’s unmerited call.” (Pope Francis, August 4th, 2019).

Getting walloped by God’s call

When I clearly felt the call of the Lord for the first time it seemed like he hit me over the head with a two-by-four of grace. I was in my first year of college and had gone to New Orleans on a mission trip a year after Hurricane Katrina. My fellow missionaries and I were at a Regnum Christi family’s house for dinner after a week of missionary work and a few Legionaries were there also. One of the Legionaries was telling us his own vocation story. He recounted how he had all he desired when he was in college; good friends, a car, a solid major with a scholarship, and a girlfriend. Yet, the Lord called him and he left everything to follow that call. As I listened to his story, I started checking off the boxes in my head of all those good things that he mentioned; I had great friends, the car, I was studying my preferred subject, I had the scholarship and a girlfriend. Then, I clearly felt in my heart the Lord asking me, “And why not you? Have you thought about the priesthood?”.

That question both troubled me and left my heart thirsting for an answer. It was the first time in my life I seriously considered the priesthood even as a possibility. At the end of that Legionary’s story, I decided to speak with another Legionary priest who was at the dinner. He specifically asked me if I had felt anything special during the testimony. I responded with a short and quick “no”. I was still afraid of opening the door of my heart to that possibility and I shut it as fast as I could. Providentially, that Legionary priest must have seen something in me, because he would later call me every month to invite me to other Regnum Christi missions. I would end up going to missions in Mexico and I was going to participate in the Youth and Family Encounter in Atlanta in 2007. All the while, the Lord’s question was burning in my heart, even though I had turned a deaf ear to that call.

It was in the summer after my first year of college that I finally opened the door to what the Lord wanted of me. I was travelling as a guest with the Legionary Candidates (young men discerning a potential call to join the Legionaries of Christ) to the Youth and Family Encounter in Atlanta. We were doing a road trip from Cheshire, Connecticut, all the way down to Atlanta. On the way, we stopped at a Regnum Christi center to have adoration of the Blessed Sacrament and then stay the night. In that adoration, I finally had the courage to say to the Lord, “Okay Lord, whatever you want of me, I want to do that.” I think it was the first time in my life that I said something like that to Jesus. And as soon as I opened my heart, I perceived very clearly that he wanted me to join the Legionaries of Christ. I felt as if a huge weight had fallen off my shoulders. Within two weeks, I had joined the Candidacy and would later enter the Novitiate.

Where did that come from?

Even though it seemed to me that the original call came out of nowhere, I would later realize how the Lord had slowly and surely prepared me for that moment. The Lord plants deep desires in our hearts and longs to bring them to fulfillment. “Before I formed you in the womb I knew you, before you were born I dedicated you” (Jer 1:5). My heart has always yearned to serve, help and heal others in a deep and lasting way. I have always longed to love my fellow brothers and sisters with a full, free and honest love. Above all, I felt the Lord has always called me to a particular relationship with him. He has always wanted my heart to be fully dedicated to him. These desires had been brewing in my heart even before I perceived the question of “And what about you?”.

Besides these desires, the Lord had also placed people, events and opportunities in my path that readied my heart to hear and respond to his call.

I grew up in a loving Catholic family and had plenty of opportunities to make my faith grow in my parish and at high school. My family moved around when I was young, but when I was seven years old we settled in the country outside of Omaha, Nebraska. Our family joined a small but joyful parish called St. James. I would participate as a server at Sunday Masses from an early age and remember having a positive experience of community in my parish. I also attended a Catholic grade school and high school called Bishop Neumann. To be honest, my main focus in high school was sports, hanging out with my friends and doing enough to keep my grades up. Even though my focus was elsewhere, our Lord planted a desire to pray in my heart. I do not really remember why, but my senior year of high school, I made the commitment during Lent to come into school five minutes early every day to pray morning prayer out of the shorter Christian Prayer Booklet. The practice stayed with me all the way through college.

I can also see how the Lord worked through tragedy in my own family. When I was thirteen, my family lost my older sister in a car accident when she was driving into school one day. The pain of this moment was inexpressible and really broke us down. Somehow, the Lord allowed this to happen and from the rubble that my family was reduced to, he brought out a deep and strong faith in me. Even though it seems impossible, there is no situation that is too dark and difficult for our Lord and his healing light.

My first year of university studies at Benedictine College was also important because of the people I met and the authentic Catholic atmosphere of the campus. I had three chapels within walking distance and a permanent adoration chapel less than two blocks away. I made some amazing friendships and started to attend daily Mass. That first year of college was the intensive immediate preparation for the call the Lord would be giving me. I remember I attended a weekend retreat and had received a scapular at the end of it. When I got back to my dorm room, I asked myself, “Alright, how do I make this thing work?”. Something I found on the internet said that to be under Mary’s protection, you should pray the rosary daily, so I started doing it. By the end of that first year of college, I had a young and strong Catholic community that was open to talking about the faith, I was attending daily mass, doing daily prayers and a daily rosary. The Lord was using all these things to quietly prepare my heart for the moment of his call and for what would come afterward. His unmerited call was coming, even though I was not aware of it.

Our Heavenly Father is always acting

These are only a few moments from my own story. The Lord did so many other things in my heart to prepare me for my vocation. The more we dig into our own past with the eyes of faith, the more we can see how our Heavenly Father is always acting, no matter what the situation. He works in the heart of each one of us. He plants desires in each one of our hearts and speaks to us through people, events and opportunities. Do not be afraid to look into your heart and let the Lord speak to you! And watch out for those two-by-fours of grace!