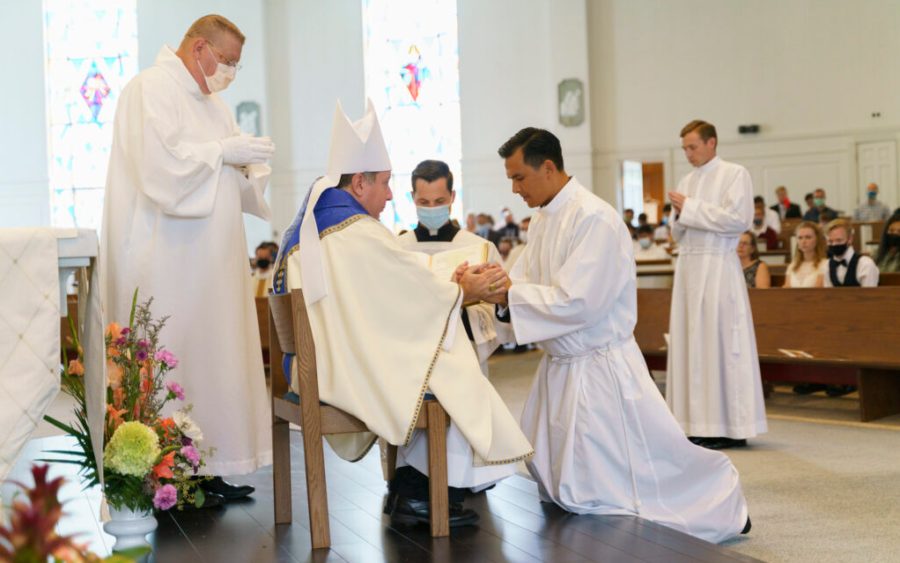 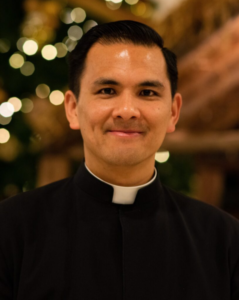 Deacon Vinh Pham, LC, will be ordained to the priesthood on Saturday May 29, 2021 at Holy Vietnamese Martyrs Parish in Atlanta, Georgia, along with Deacon Michael Sester, LC. You can join him for the livestream of his ordination here. Deacon Vinh shares his vocation testimony below.

I am the first American-born member of my family. My life and vocation exists today for the price of the risks my parents and grandmother took. In 1975 the Vietnam war ended and the communist party took power. My family had been transported from the North to the South near Saigon, modern day Ho Chi Minh City. My father worked night shifts as a driver of a borrowed mini tricycle truck, a makeshift taxi. He saved up enough funds to start a tiny 3-taxi fleet of his own to feed his wife and three children.

Even as young adults, my parents knew the fate of the country and that of our family’s. At the very first chance, they risked attempts to escape their homeland and give us a future. After several attempts, which each left them poorer than the last, including months spent in prison, they finally made it out to the open sea. There too, they miraculously dodged numerous life-threatening close calls. In 1982, my family arrived in Southern California, thanks to a generous sponsor family.

On March 28th, 1984 I was born in Fountain Valley, California. My parents are unbelievably hard working people. My grandmother was the baton of faith in our family. She was firm and relentless in teaching us our prayers from a very young age. My mother is a hardworking and patient mom of now 7 children. During most of my childhood, my father was a passing shadow in the evenings as he was required to work long hours to provide for the family. His faith is from the school of hard knocks, straight and by the books. Most of my early years were spent in a small apartment. We didn’t complain much since we always had each other and there was plenty of entertainment to go around.

In their elder years now, my parents recently revealed to us the hidden drama of their marriage while we were young children. We never once saw an open argument between our parents yet little did we know that they were once at the verge of divorce. They came to an unbearable point of no return. Unexpectedly, they found themselves at a marriage counselling retreat which changed their lives. Things didn’t improve overnight, but this awakening set the future of our family in motion.

In elementary school, I remember being seen as the little Asian boy. English was very difficult because our first language was Vietnamese. Everything behind the closed doors of our home was Vietnamese, from food to culture to faith. Yes, my faith was a Vietnamese Catholic faith, though I didn’t know it until I entered the Legionaries of Christ. My parents didn’t just fight against their adolescent children, like any normal family, but they also fought this new and foreign “American” culture that their children would drag in with them like mud on their shoes. I’ll get back to this point in a bit.

My parents worked hard to keep all of us in parochial schools. We had stints when we went to daily mass when mom could find the time. I still remember vividly the way I admired our parish priest. I dreamed of someday being vested just like him on that altar. I jumped at every chance to be an altar server. One other thing I remember is the fact that I wanted to be a priest but not that “kind” of priest, meaning a priest in a parish. Later in life I discover that my vocation was to be a missionary priest, rather than a parish pastor. How an 8-year-old boy made that distinction beats me.

Since my parents were foreign to the new culture we were so exposed to, they only had a handle on us in the security of our home. I developed somewhat of a split personality, or rather a culturality. I’d be one way at home and another outside. This recipe, along with the generous lifestyle of Southern California, is a dangerous combination. In my early adolescent years to young adult life, I jumped at any and all occasions to have fun. There were no boundaries to the kinds of friends I could have outside the closed doors of my home. My friends usually weren’t the best kids on the block, but they were good friends nonetheless. Eventually, I settled into a hobby that kept me quite occupied and prioritized my time: cars, motorcyles, speed, girls, then everything else.

I love cars and mechanics. I quickly learned that I was good with my hands and can make things go fast pretty effectively. When you come from a poor family yet you have a sweet tooth for speed, you become very creative at making ends meet. Morality hadn’t quite settled into my life yet so I often found myself with the wrong bunch. Fast forward a few years and by the grace of God I got an associates degree in automotive computers, and was drafted and trained by Mercedes Benz of America. I spend 2 very enjoyable years working for them in Atlanta.

The saving grace that kept me from speeding to irreparable end was my Vietnamese Catholic faith. In America, wherever there is a conglomeration of Vietnamese Catholics, besides abundant Phở restaurants, there is an active youth movement formerly called TNTT, now VEYM (Vietnamese Eucharistic Youth Movement). Every single Catholic Vietnamese-American child must have gone through this movement. This meant spending four to six hours at church every weekend. Spending that much time every week with the same kids, you inevitably start building lasting friendships. I was in this movement from the age of seven until I entered the religious life.

The call to the priesthood kept nagging at me from time to time. Way in the back of my heart somewhere, there was always this wondering. I decided to enter a minor seminary at age 17. Nine months and two fist fights later I discerned that it wasn’t my calling and returned home. With that “wondering” behind me, I could finally live my life in peace and prepare for a family.

Almost immediately after leaving, God placed a beautiful and faith-filled young lady in my life. A person who really had no business being there. My new normal was now juggling the masks of the car scene, church scene, dating scene, and family scene. Life was going quite well. Seven years later in that relationship I was quite content with my life, looking forward and on the verge of stepping into married life.

In 2009 the perfect storm of my life was on the cusp of erupting. The economic crisis of 2009 left me jobless and my relationship was also going through twists and turns. At that very moment a friend from the youth group invited me to come visit him in Cheshire, Connecticut, the Novitiate of the Legionaries of Christ. I went with zero expectations in mind, except one: “I’m not here for the vocation, I just need a break and to visit an old friend.” “Been there, done that” I told myself.

I was interiorly convinced of the low quality of human specimen that I had believed find their way into seminaries: jobless, dateless, lifeless. Now with more life experience under my belt I wondered, “why else would a person want to live their life like this?”

I was in for the shock of my life.  Blown off my spiritual feet, to be exact. That was it. Simply blown away at what I witnessed on January 13th, 2009. Contrary to popular (or so I thought) belief, I encountered lively, strong, athletic, balanced, kind, faith-filled, and normal men. This solid, manly way of living was very intriguing, to say the least. I was absolutely determined to find the core of what made these guys tick. I planned a return visit.

Holy Week 2009: my first legitimate silent retreat ever. In that silence, along with the somber yet magnificently beautiful liturgies, I discovered Christ, the man… the friend.  The silence crushed me. In that silence I found life. I found meaning. I found God within me. The immense joy of this discovery left me begging for more. That Holy Week Triduum stripped me of everything I had thought I’d known. It was a rollercoaster ride of discoveries and emotions. One thing I knew for sure: I never want to live my life without this “God” ever again.

My firm expectation was still set: I’m not here for a vocation. On the dusk of that same Holy Saturday, I felt a voice in prayer: “Come follow me”. My conviction still stood: “I’m not here for a vocation. I will not say yes to the vocation, but I will say yes to the next step. I don’t know many things in life but one thing I know for sure; I know that I never want to live the rest of my life without this joy that you’ve revealed to me. God, I’ll give you one step, one ‘yes.’”

That one “yes” led to another… three months later I found myself entering the Legionaries of Christ at the age of 25. The next twelve years flashed like the blink of an eye and now I stand at the threshold of an eternal change. “One step at a time,” I said, “only one step”. That was the best first step of my life.

I pray to be his faithful priest for the rest of my life, to expand his kingdom and bring all souls to know, love and imitate Christ. Christ our King, thy Kingdom come!