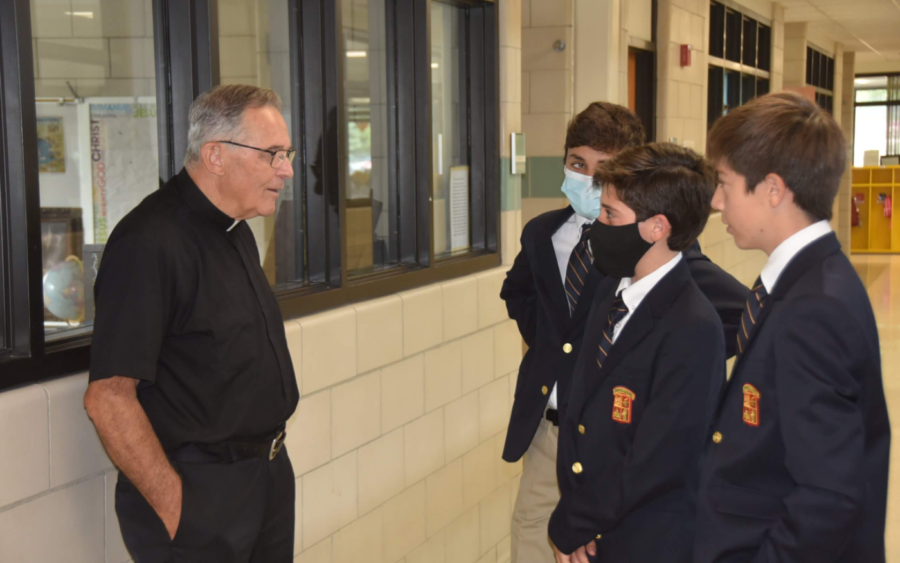 In the fall of 1991, Everest Academy, in Clarkston, Michigan, opened its doors to just 33 students. In September of this year, 30 years later, the school, now known as Everest Collegiate High School & Academy, celebrated its anniversary with a week of festivities. With a current enrollment of 427 students in grades preschool-12, Everest has impacted the lives of thousands of students and families. 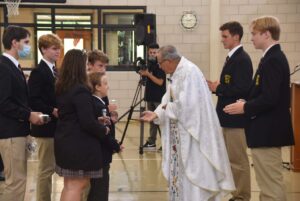 Everest Collegiate High School & Academy is an independent, preschool-12th grade Catholic school within the Archdiocese of Detroit and part of the Regnum Christi network of Catholic schools. Reflecting the charism of Regnum Christi, Everest is rooted in a specific calling to make Christ’s Kingdom present in the hearts of their students, staff and faculty, and families, and in society as a whole. Everest’s emphasis on both the personal relationship with Jesus Christ and the call to apostleship is captured in the school’s mission statement, to “teach students to be Catholic, Christian leaders who are capable of utilizing their strengths, so they can fulfill the unique plan that God has for each of them.”

Everest’s approach, inspired by the charism of Regnum Christi, can be characterized by a specific way of living the spirituality or mission through a focus on five elements: personal prayer and sacramental life, finding and living one’s apostolate, accompaniment by and of others, team life, and formation. Largely, these elements are realized through the school’s pedagogical model of Integral Formation, a comprehensive and personalized approach that focuses on four key aspects of student development: spiritual, intellectual, human, and apostolic formation. Integral formation occurs through this comprehensive and personal focus within each classroom and by all educators within the school, as well as through an intentional school culture that seeks to live the charism through prayer, community, customs, and traditions that are radiating the charism of Regnum Christi. 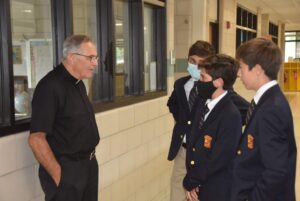 In 1992, the staff of three teachers and chaplain, Fr. Lorenzo Gomez, LC, moved from a local church into four classrooms and a chapel on the lower level of the first phase of the original building on Everest’s campus. As student enrollment increased, the classrooms on the second floor of the initial building were completed and housed students. In 1995, the second phase of construction on the initial building began with the addition of a full-service kitchen, gymnasium, cafeteria, and separate international building to the campus. The international program, initially available for boys in 6th, 7th, and 8th grades, enrolled its first students in the fall of 1997 with nine boys. The international program expanded in the fall of 2000, adding a girls’ program with a residential campus in Oxford. Although suspended for the 2020-2021 school year due to the COVID pandemic, the international program continues to operate, receiving students from various countries in 6th-11th grades who provide a unique flavor to the school through the blending of cultures and the formation of friendships that cross continents. Over the years, Everest has witnessed the mutual benefits for both its international students and its day students of this cultural interchange. With the increasing enrollment, the school was able to achieve one of its long-term goals in the fall of 1998 by providing gender-specific classes on a coed campus, and the elementary and girls’ school building opened its doors in the fall of 2002. Everest continues to offer gender-specific formation for all students and gender-specific classrooms for specific content areas in middle school and high school. 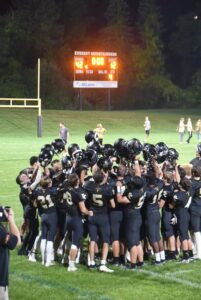 Since 2012, the Cardinal Newman Society has recognized Everest as a School of Excellence, and in 2016, Everest was recognized by the U.S. Department of Education as a National Blue-Ribbon School of Excellence. Over the past 30 years, Everest has grown from a staff made up of just three teachers and a chaplain, teaching out of a local church, to an award-winning school with a robust enrollment, championship athletics, and a dynamic international program, all situated on a 90-acre campus.

Founding priest, Father Gomez, returned to Everest for Founders’ Day and the 30th-anniversary celebrations held in September of this year and echoed what has been often said, “There is something special here.”

The anniversary celebrations began on Wednesday, September 15th, with a Mass for all students, concelebrated by several priests. Also present were Mary Anne Williams and Kay Browne, who were among the founders of the school in the late 80s and early 90s, and Maura Plante, Everest’s admission director of 23 years. During the Mass, Father Gomez recounted the generosity of the founding families, giving special mention to the example of the Thewes family. Five grandchildren of the founders presented the gifts during the offertory of the Mass. After Mass, Father Gomez spent time greeting the students and sharing a pizza lunch with the high schoolers. He spent the rest of Wednesday and all day Thursday meeting with groups of faculty, staff, and students, as well as some members of the board of directors to share memories of the foundation of the school and also the vision that inspired its foundation. 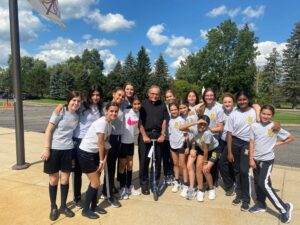 Founders’ Day activities continued with Friday Masses for students and a home football game for the Everest Mountaineers. Father Gomez prayed a blessing over the permanent athletic field lights (which had recently been installed thanks to the generosity of benefactors and the hard work of many) and all those who will play under them: “We ask you, Father, to bless these lights but also to enlighten our souls so that our homes will be like the home that you had in Nazareth, full of light because you are the light. Enlighten our consciences so that we can make good decisions and that these external lights will become the spiritual light that will lead us to heaven.”

To add to the celebrations, the Mountaineers claimed a 42-12 victory over Allen Park Cabrini! The anniversary celebrations concluded with a community Mass on Saturday afternoon. 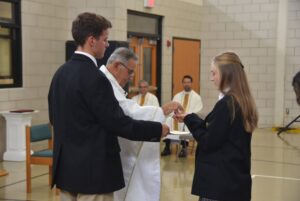 As Everest celebrates its 30th anniversary, it has chosen a theme: Recall. Reconnect. Refocus. Throughout the year, the school is delving more deeply into just what it is that makes Everest unique. Everest Collegiate High School & Academy shares in and passes on the charism of the Regnum Christi spiritual family to its students, faculty, and families. This charism is rooted in a love for Christ flowing from a personal encounter with Him that urges an individual response of bringing that same love to others. Everest has a distinctly charismatic culture that is manifest in its classrooms, throughout the campus, and within the community.

To find out more about Everest Collegiate High School & Academy, visit their website at everestcatholic.org.