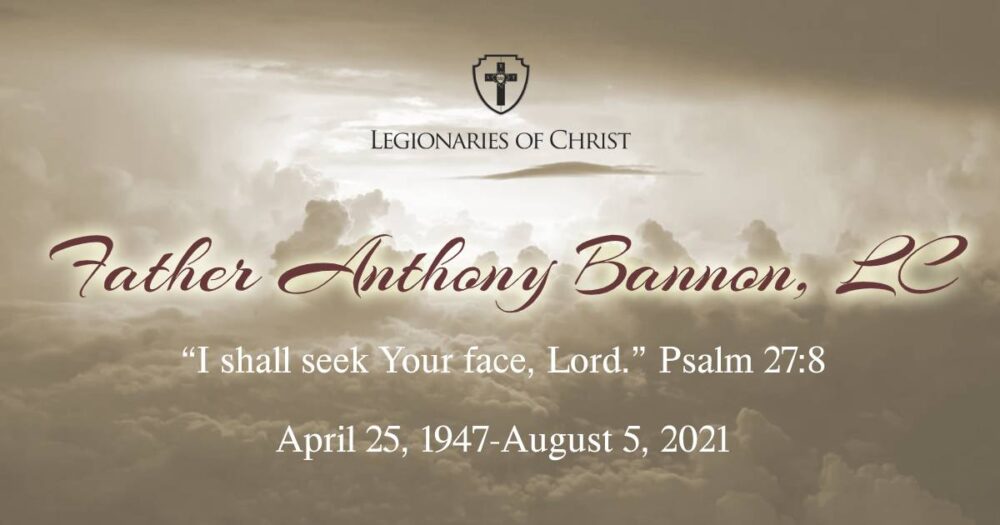 Fr. Anthony Bannon, LC, was born in the “Old Sod,” Dublin Ireland, on April 25, 1947. His Mom and Dad had six children: Fr. Anthony and his five sisters. One of his sisters, Patricia Bannon, is a Consecrated Woman of Regnum Christi currently serving in Chile. Fr. Anthony felt the Lord’s call to be a Missionary in Latin America and joined the Legionaries of Christ’s novitiate in his sunny-cloudy hometown of Dublin on September 14, 1964.

We invite you to commend him in your prayers so that God our Lord will grant him eternal rest and perpetual light shine on him.

Here you can express your condolences or share a memory of Fr. Anthony.

If you want to express your condolences or share a personal memory of him:

In lieu of flowers please consider a donation to the Fr. Anthony Bannon Memorial Endowment to provide scholarships for Legionaries of Christ seminarians.

Just learned of Fr. Anthony Bannon went to our Heavenly Father home already after a life of faith and commitment. Great mentor, great human being… so thankfull for having him back in 1977 as a spiritual guide in Orange Conn with Antonio Onesimo, Desmond Brannigan, Jose Quiroz and myself. Thank you Fr. Anthony, live always in our hearts … “Because our God is God of the living, not of the dead”…

Fr. Anthony was the first Legionary priest I met and certainly the most impressive one, so much so that I left it all to enter the novitiate in Orange, CO, in 1980, I wanted to be so much like him. I was among the first group of men who professed in Cheshire in 1982. It was a privilege to have known him and I pray he continue to watch over me and intercede for me and my family.

Nancy and David Wilson and family

We were saddened to hear of the death of Father Anthony Bannon, and wish to express our heartfelt sympathy to all Legionary priests and brothers for your loss. Though we have never met Father Anthony, we were edified to learn about the wonderful life he lived in the service of God and the Church. What an beautiful witness and inspiration.

An inspiring example of a disciple of Christ, one that has marked my life and priesthood. Thank you, Fr Anthony!

Thank you Fr. Bannon for being so instrumental in my vocation and many others from New Zealand and Australia. I know you had a special place in your heart for our countries, and we ask you now to continue praying for us. Thank you for thinking ‘outside of the box’ and seeing the potential in my 18 year old self, to be an apostle within this spirituality. Who knew that our brief meeting in NZ in 2000 would pave a path to me finding my vocation to Consecrated Life in Regnum Christi. I am grateful for your fatherly advice when I was discerning during my RC Missionary year and for always giving me the time to talk.

We owe so much to you here in the territory. Thank you.
May you rest in peace.

May the Lord grant you all consolation in your grief on missing your dear brother in Christ. May his soul be in the presence of the Lord, our Blessed Mother, the Saints and angels.

I am saddened to learn of Fr. Bannon’s death. I met him at Magdalen college while I was a student and he would come to give days of reflection. It was through conversations with him that I discovered my vocation to religious life. As a religious, I was sent to study clinical psychology at IPS, which he was also a part of. I am grateful to him and will pray for the repost of his soul.

By the example that we have learned from the life of Fr. Bannon, we can listen these words… “Well done thou good and faithful servant: thou hast been faithful over a few things, I will entrust you many” Thank you Father Anthony for your love and service. Please pray for us.