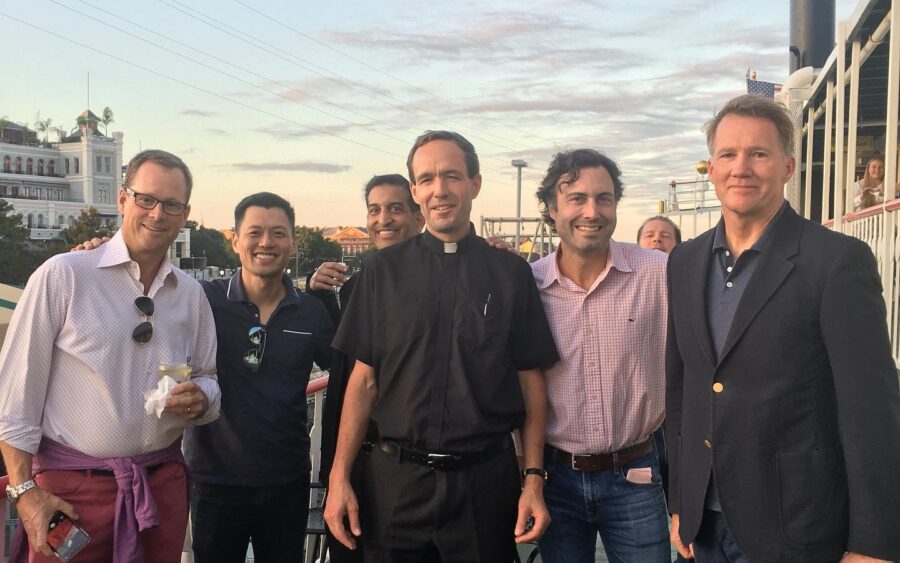 For about a decade, Fr. Michael Sliney, LC, has organized mission trips to New Orleans, bringing Lumen Institute members and their daughters on a spiritual journey of service to assist at a school for students with special needs and at homeless shelters. Thomas Lloyd has gone on these trips for six consecutive years with his daughter Fiona, who is now 11. For him, “It has been one of the top trips of our lives as a father and daughter: certainly, one of her favorite experiences every year.” He finds that through the experience she has grown to love the people and culture of New Orleans.

Lloyd continued speaking about his daughter, “It gives her first-hand real experience with [the homeless and those with special needs]. It has provided her a tremendous learning lesson in sympathy and love for people who are not as fortunate as we are.” He feels like the lessons she learned sharing pizza or other items with the homeless in New Orleans have transferred back to their ordinary life. He noted, “Now when we’re in Washington, DC and we’re walking down the street, she’ll see a homeless person and immediately stop and ask how they are doing and say a prayer with them. She’s just very aware.”

Lloyd feels like it has helped him too: “It helped me develop a much clearer picture and awareness for taking time out to reflect and humanize people who don’t have the same types of experiences that we just take for granted.” Fr. Michael Sliney, LC, explains that they have been going on this mission annually for about a decade. The missionaries volunteer at St. Michael’s Special School, where they spend time with the kids, help with some physical service project, and visit the homeless there. The families at the school there collect items for the homeless, which Fr. Sliney and the missionaries distribute. Fr. Sliney has a nephew with autism and a niece with Down’s syndrome, so he feels a personal connection to helping at a school like St. Michael’s.

St. Michael’s, started educating students with intellectual and developmental disabilities including autism, ADHD, developmental delay, traumatic brain injury,  in 1965, one of the earliest schools to take on this mission. The school’s website notes that their mission is “to provide a Catholic environment where students with special educational needs are able to grow in faith and reach their full potential – academically, socially, and physically.”

As these missions have been going to New Orleans, the city has engaged in one of the most effective programs to reduce homelessness, nationwide. They’ve gone from close to 6,700 homeless in 2011 to fewer than 1,200 in 2018. Pew Trust quotes Steve Berg, vice president for programs and policy at the National Alliance to End Homelessness, about the change in New Orleans, “It’s heroic stuff… They really shook things up and forced people to work together who weren’t before — and demanded results. It’s a great story.” The story from Pew goes on to describe various means used such as free housing, new affordable housing, health care initiatives, and a low barrier shelter, which the city implemented in combination. Fr. Sliney notes that part of the mission is forming the missionaries themselves. He explains, “The real focus is having the fathers and daughters spend time with the community.” He continued, “The goal is to have the fathers and daughters bond in a meaningful experience that’s spiritual. Also, I want them to have an experience of the special needs community so they can better understand it, and be more sensitive.”

Every morning they have a time of prayer during which Fr. Sliney or Fr. Daniel Wilson, LC, leads a mediation with the dads while either Mary Smith, a Consecrated Woman of Regnum Christi, or one of the young women in Regnum Christi Mission Corps, leads one for the girls. Fr. Sliney explained the meditations: “Our two goals are to help them value their role as fathers and to help them try to develop a serious structure in their prayer life.”

Michael Austin, who has written a book on fatherhood, notes how important the father-daughter relationship is. He states, “What matters in the father-daughter relationship is that Dad seeks to live a life of integrity and honesty, avoiding hypocrisy… He should try to model a reflective approach to life’s big questions so that she can seek to do the same.” These missions help dads do that effectively.

Pierre Ferragu, who has gone with one or both of his daughters for the last three years, spoke about how he was moved by a homeless man who asked them to pray for those in his family who were didn’t like him. “Praying for people who were mad at you was something I had never heard of before,” he shared.

Ferragu also explained how it has helped his relationship with his daughters. “Having the opportunity to strengthen your relationship with your daughters with a trip that is with just her and you, a trip focused on love, on charity, on Jesus, is an absolutely exceptional step up in how I can have a positive influence on her.”

One of Ferragu’s daughters has taken up babysitting children with special needs as a way to give back once she returned from a mission where she spent a lot of time with them. He explained, “We try to keep the lessons we learn on the mission alive throughout the year.” Ferragu concluded, “If you do it even once, it will have a stronger effect on your daughter than you could ever suspect.”

Fr. Michael Sliney, LC, concluded by pointing out why this event is different, “There are a lot of daddy-daughter events like dances or teas out there, but I don’t think there are a lot of meaningful trips like this. It’s more than just dancing for a couple hours. It can make a profound impact on their lives. It teaches them: one, faith matters; two, you matter, and three, giving back matters.”

If you are interested in going with your daughter, please email Fr. Michael Sliney, LC at msliney@legionaries.org.