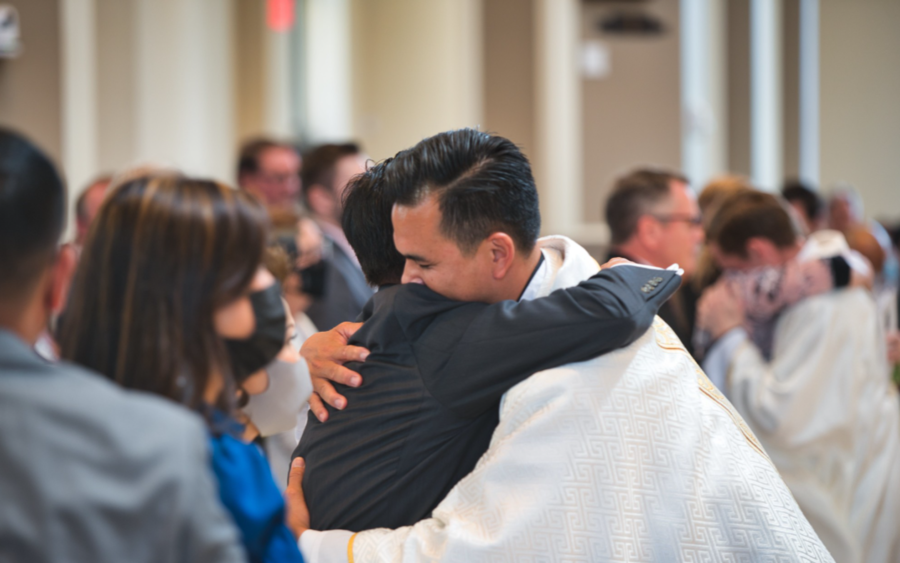 At the end of a discernment and formation period that generally lasts about 14 years, Legionaries of Christ are traditionally ordained together as a cohort every spring at a basilica in Rome. This year, the COVID 19 pandemic and related restrictions currently in place in Italy prevented a traditional group ordination. Instead, 37 Legionaries who are concluding their time as transitional deacons this summer will be ordained in different places around the world, generally in the countries and cities that they grew up in. 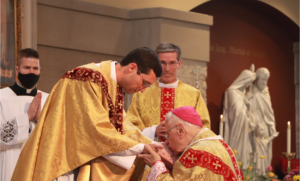 Fr. Seth Sabata, LC, was ordained to the priesthood on April 10th, 2021, by Bishop Fabian Bruskewitz in Lincoln, Nebraska. Born in Lincoln and raised in a rural area outside of Omaha, where he attended school and was an altar server at St. James’ parish, Fr. Seth heard God’s call to the priesthood while studying biochemistry as a first-year college student at Benedictine College in Atchison, Kansas. He first met Regnum Christi and the Legionaries of Christ on a mission trip to New Orleans following Hurricane Katrina. “I was in my first year of college and had gone to New Orleans on a mission trip a year after Hurricane Katrina. My fellow missionaries and I were at a Regnum Christi family’s house for dinner after a week of missionary work, and a few Legionaries were there also. One of the Legionaries was telling us his own vocation story. He recounted how he had all he desired when he was in college; good friends, a car, a solid major with a scholarship, and a girlfriend. Yet, the Lord called him, and he left everything to follow that call. As I listened to his story, I started checking off the boxes in my head of all those good things that he mentioned; I had great friends, the car, I was studying my preferred subject, I had the scholarship, and a girlfriend. Then, I clearly felt in my heart the Lord asking me, “And why not you? Have you thought about the priesthood?” Several months later, at the end of his first year of college, Fr. Seth shared that, “I finally had the courage to say to the Lord, “Okay Lord, whatever you want of me, I want to do that.”  Within two weeks, he attended the Legionaries of Christ’s Candidacy Program in Cheshire, Connecticut, and entered the novitiate that fall. 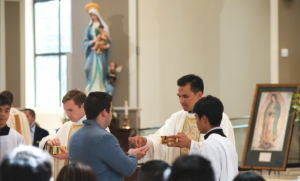 Fr. Vinh Pham, LC, and Fr. Michael Sester, LC, were ordained to the priesthood together on May 29th, 2021, by Bishop Ned Schlesinger at Holy Vietnamese Martyrs Church in Atlanta, Georgia, with Fr. John Connor, general director of the Legionaries of Christ, in attendance.

Fr. Vinh Pham, LC,  is the first American-born member of his family. His parents fled Vietnam in 1982 and settled in Orange County, California, where he was born. After high school, he moved to Georgia, earned an associate degree in automotive computers, and worked two years for Mercedes Benz. At a silent retreat during Holy Week in 2009, Fr. Vinh deeply experienced Christ’s call and wrestled with what it meant. He recalls, “On Holy Saturday, I felt a voice in prayer: ‘Come follow me.’ My conviction still stood: ‘I’m not here for a vocation. I will not say yes to the vocation, but I will say yes to the next step. I don’t know many things in life, but one thing I know for sure; I know that I never want to live the rest of my life without this joy that you’ve revealed to me. God, I’ll give you one step, one ‘yes.’” That one “yes” led to another and another and another… three months later, Fr. Vinh entered the Legionaries of Christ at the age of 25. “The next twelve years flashed like the blink of an eye, and now I stand at the threshold of an eternal change. ‘One step at a time,’ I said, ‘only one step.’ That was the best first step of my life. I pray to be his faithful priest for the rest of my life, to expand his kingdom and bring all souls to know, love, and imitate Christ.” 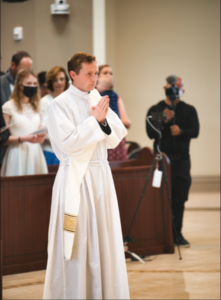 Growing up in Rogers, Minnesota, Fr. Michael Sester, LC, dreamed of becoming a husband and father. As he discovered the pathway to his priestly vocation in prayer, he joined the Novitiate of the Legionaries of Christ and began his journey of formation. He recalls a moment during those years when he was working in Mexico. “I lived in Mexico for two years between theology and philosophy, working in a school with adolescents.  It changed my life.  It was like all my desire for fatherhood was filled to overflowing.  And I realized that the priest is called to love with all he is, only that he is called to do it with God and with an open heart. Jesus was the face of the Father, and the priest is configured to Jesus.  I hope and pray to be able to show God the Father to those around me.  I remember looking at the kids and thinking, ‘God loves you so much! You have no idea! I know it!’ It was just that I felt so full in those moments.” God did indeed grant Fr. Michael’s desire for fatherhood, but in a way completely different from how he had imagined it as a child. 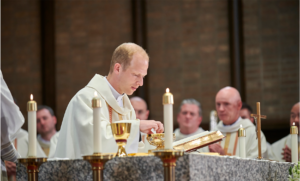 Fr. Russell Ward, LC, was ordained to the priesthood on June 12, 2021, by Bishop Earl Boyea at St. Mary Cathedral in Lansing, Michigan. Fr. Russell was raised in Flint, Michigan, the oldest of seven children. He experienced the desire to discern the priesthood while visiting the Legionaries of Christ’s apostolic school in New Hampshire at age 14 and finished his high school there before joining the novitiate in Cheshire, Connecticut. He reflects on how God worked in his soul from that time onwards, “This was the start of a long journey of intentionally trying to open my heart to God’s overwhelming grace, to be led by him wherever he would take me. And what an adventure it has been! I am amazed looking back how Our Lord has gradually dilated my heart, revealing more every day what he is calling me to as a Legionary priest. Put simply, I have found that God fills us with deep desires in our hearts and, if we let him lead us, he will undoubtedly begin to fulfill all of these desires in unexpected ways.” As Fr. Russell continued his studies in Rome, obtaining a Master’s in Philosophy and a Bachelor’s in Theology, he also discovered a personal love for academics and teaching. He is currently studying for a Master of Theology at Notre Dame University. After this, he hopes to pursue a doctorate to teach seminarians in the Legionary university in Rome.