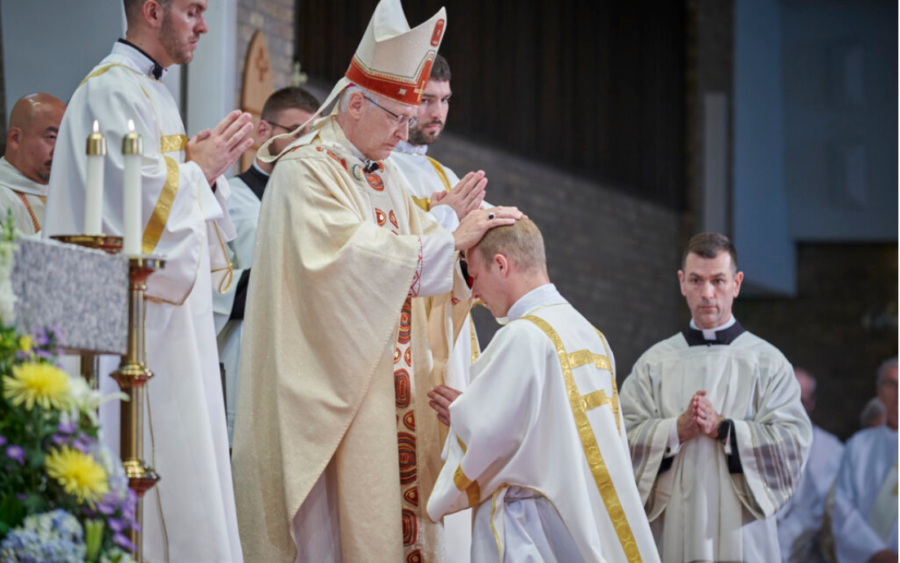 Fr. Russell Ward, LC, was ordained to the priesthood on June 12, 2021, by Bishop Earl Boyea at St. Mary Cathedral in Lansing, Michigan. Fr. Russell was raised near Lansing in Flint, Michigan, the oldest of seven children. He first experienced the desire to discern a potential vocation to the priesthood while visiting the Legionaries of Christ’s apostolic school in New Hampshire at the age of 14. He enrolled and finished his high school there before joining the order’s novitiate in Cheshire, Connecticut.

As Fr. Russell continued in his formation, he relates in his personal testimony; he realized that “This was the start of a long journey of intentionally trying to open my heart to God’s overwhelming grace, to be led by him wherever he would take me. And what an adventure it has been! I am amazed looking back how Our Lord has gradually dilated my heart, revealing more every day what he is calling me to as a Legionary priest. Put simply, I have found that God fills us with deep desires in our hearts and, if we let him lead us, he will undoubtedly begin to fulfill all of these desires in unexpected ways.”

After the COVID 19 pandemic made it necessary to cancel the traditional group ordinations that the Legionaries of Christ had planned in Rome for April 24th, 2021, Fr. Russell turned to the bishop of his hometown diocese, Bishop Earl Boyea of the Diocese of Lansing, Michigan, who warmly invited him to be ordained along with two diocesan seminarians on June 12th.  To Fr. Russell, this was a meaningful act of Providence. At his ordination, he noted that receiving both the anointing of confirmation and the anointing of the priesthood by the bishop of Lansing emphasized to him that he has a spiritual home and deep roots in the diocese, no matter where in the world he is sent on his mission as a priest of the Legionaries of Christ.

During the homily for the ordination Mass, Bishop Boyea encouraged the new priests to remember the source of the light that they are to bring into the world and to live their ministry with deep humility, “Even as Paul recognized that the ministry he received was not his own, so you must acknowledge the true origin of the light that you are to be. Paul refers to God’s edict of light at the beginning of the book of Genesis to point to the true source of any knowledge of Jesus Christ that we might end up having. And so, since God has chosen to say, ‘Let there be light,’ and he says that in you today, it does not change the fact that we are truly only earthen vessels. The light is not us but is always of the one who says, “Let there be light.” It is ascribed to St. Augustine to “pray as though everything depended on God, work as though everything depended on you.”

To emphasize the attitude of humility of heart and generous service the new priests were to live, Bishop Boyea concluded his homily by washing their feet, inviting them to join him in following the example of Jesus Christ as they begin their priesthood.

At the end of the Mass, each of the new priests gave a few remarks.  Fr. Russell shared his gratitude to his family, his home diocese and bishop, to the Legionaries of Christ, and especially to Our Lady, who gave him the particular grace of being ordained on the solemnity of the Immaculate Heart, a heart in which he said he felt “embraced and cared for, sheltered under her mantle of protection.”

Fr. Russell will now continue his studies for a Master of Theology at Notre Dame University. After this, he hopes to pursue a doctorate degree in order to teach seminarians in the Legionary university in Rome.

Link to the video of Fr. Russell Ward’s ordination