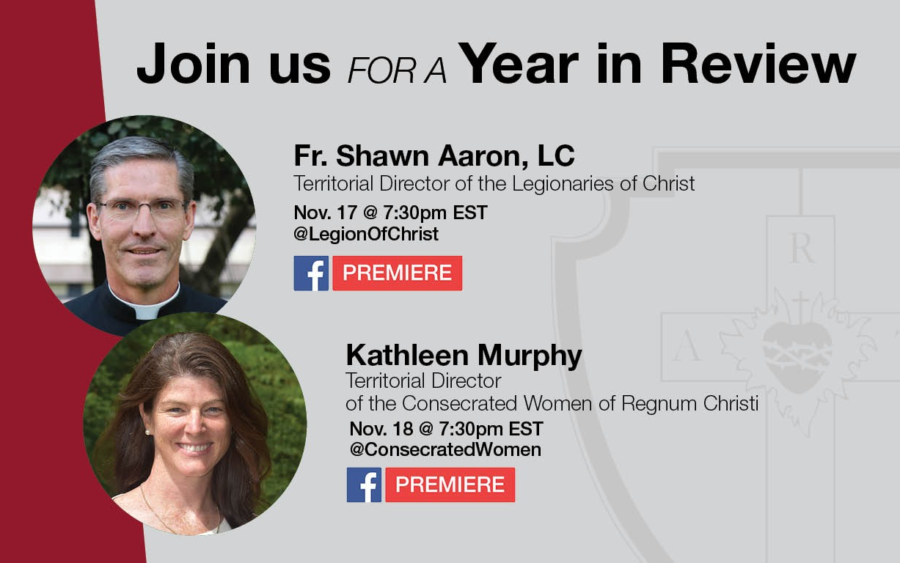 As 2021 draws to a close, the Territorial Directors of the Legionaries of Christ and the Consecrated Women of Regnum Christi shared a look at what’s happened over the past year in two “Year in Review” discussions.

On Wednesday, November 17th, Fr. Shawn Aaron, LC, and Fr. Daniel Brandenburg, LC, had a wide-ranging discussion about the status of the Legionaries of Christ, their mission, and their role in the Regnum Christi Federation. As he completed the first year of his three-year term as territorial director, Fr. Shawn reflected on the five priestly ordinations and the seven diaconate ordinations that were held in this territory in 2021, and how the Regnum Christi family embraced and supported the celebration of these new deacons and priests in each instance. He also spoke about the mission of the Legionaries of Christ in the midst of a secular world, in terms of education, youth formation through ECYD, and support of Catholic families through their involvement in programs such as the Regnum Christi initiative that has grown out of Manhattan, called Cana Uncorked. Another growing area of ministry for the Legionaries is chaplaincy in universities. They are currently involved in the chaplaincy of five universities, Benedictine College, St. Leo University, North Carolina State University, Georgia Tech, and Kennesaw State University,  as well as Divine Mercy University, which is run by the Legionaries of Christ, and offers graduate degrees and certificates in several aspects of psychology through the lens of Catholic anthropology.

Fr. Shawn identifies the uniting element in all of the diverse missions the Legionaries undertake as endeavoring “to enkindle the heart of an apostle, and then teach that apostle to look around and say ‘what are the needs of the Church?'”

Apostolates Kathleen highlighted include the RC Music Collective, a group made up of Regnum Christi lay members, Consecrated Women, and Legionaries of Christ which evangelizes through music and forms parish music ministers for evangelization, and RC Mission Corps, which has 11 young women dedicating a year of full-time missionary work with the Consecrated Women in Regnum Christi localities.

After years of reflection, renewal processes, and self-identification, the Consecrated Women globally are now focused on living this identity and being fully alive in their mission. Kathleen shared the sentiment today as “Let’s live what has resounded in our hearts, let’s live the mission.”  Another top priority currently is working towards financial sustainability as a newly autonomous Society of Apostolic Life, approved by the Holy See in late 2018.