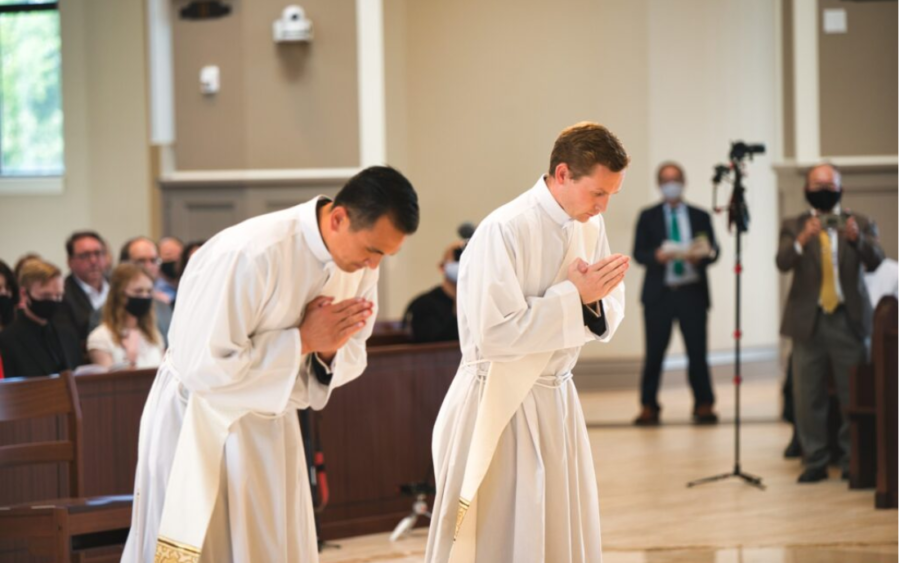 Fr. Vinh Pham, LC, and Fr. Michael Sester, LC, were ordained to the priesthood together on May 29th, 2021, by Bishop Ned Schlesinger at Holy Vietnamese Martyrs Church in Atlanta, Georgia, with Fr. John Connor, general director of the Legionaries of Christ, in attendance.

In a moving and reverent Mass attended by hundreds of family, friends, and members of Regnum Christi, the two deacons received their priestly ordination as the culmination of over a decade of priestly discernment and formation.

Originally from Fountain Valley, California, Fr. Vinh Pham, LC, was born to parents who had risked all on a perilous journey to escape Vietnam as refugees, settling in the United States. His faith took root through a deeply devout Vietnamese Catholic experience and grew into a vocational call he recognized at the age of 25 while working in the automotive industry in Atlanta. He attended a silent retreat over Holy Week during which he discovered a profound personal friendship with Christ. He explains, “In that silence, along with the somber yet magnificently beautiful liturgies, I discovered Christ, the man… the friend.  The silence crushed me. In that silence, I found life. I found meaning. I found God within me. The immense joy of this discovery left me begging for more. That Holy Week Triduum stripped me of everything I had thought I’d known. It was a rollercoaster ride of discoveries and emotions. One thing I knew for sure: I never want to live my life without God ever again.”

Fr. Michael Sester, LC, grew up in Rogers, Minnesota. As a child, he dreamed of becoming a husband and father while God began to gently steer him towards the vocation that would fulfill him more deeply than he could imagine, serving the bride of Christ as a spiritual father, an Alter Christus, a priest. Just prior to his ordination, he reflected, “I will be deeply configured to Christ.  He goes where I go.  He acts when I act even if I am weak, and most of all, he wants to love through my love. ‘As you sent me into the world, so I have sent them into the world… I made known to them your name, and I will make it known, that the love with which you have loved me may be in them, and I in them.’ (John 17:18) I think of my hands being anointed with oil, oil that consecrates, perfumes, heals, and illuminates.  Can my hands do that?  I think of his hands inside mine like gloves.”

During the homily of the Ordination Mass, Bishop Ned Schlesinger of the diocese of Atlanta gave the new priests pastoral advice and encouragement, telling them, “Vinh, Michael, rather than think about something happening to you today, think of your ordination as someone who is working in you, living and acting and transforming you. You are not ordained just to perform rituals or do priestly tasks. You must strive, with the help of the Holy Spirit, to become a living image, or icon of Christ, the High Priest and Good Shepherd, and an image of God the Father….The people of God should not look at you as managers of a business. You are Alter Christus who are willing to become like Jesus, a victim, a sacrifice. A good shepherd, not a hired hand, who knows his sheep and calls them by name and lays down one’s life for them.”

Bishop Schlesinger went on to instruct the new priests to make their spiritual lives their first priority, “So important it is for priests to be men of prayer. St. Paul even advised Timothy to fan into flame, to stir into flame, the gift of God which is in you through the laying on of my hands. So watch over your prayer life. Guard it with barbed wire. Do not let this thief steal the treasure that is within you.”

Turning to the assembled congregation, he encouraged the faithful not to lose hope as they face spiritual battles in a secular culture. “Beware of discouragement. And I say this not only to the priests today but to all of you here today. We live in a very secular society. We live in a world where Christians seem to be out of step with the trends that are in the news today. We can become very discouraged that we’re losing the spiritual battle and focus on numbers rather than the action of God in his church. You did not choose Christ; Christ chose you.”

At the conclusion of the Mass, Fr. John Connor, LC, general director of the Legionaries of Christ, gave closing remarks. Responding to the Bishop’s exhortation to be holy priests deeply rooted in Christ, he said, “As you know, Bishop Ned, your Legionaries are very passionate about Jesus Christ. And we’re passionate about serving the Church. We share that passion with our brothers and sisters in Regnum Christi. And as you mentioned in your homily, the spirit of service, humble service, is the path of Jesus Christ and the example that the Church and the culture need. Our prayer is that we may be that example, with the grace of God.”

Following their ordinations, Fr. Vinh will continue his ministry to youth and young adults in the Washington, DC, area, and Fr. Michael will return to Chile as a formation instructor in a high school run by the Legionaries of Christ.

Link to transcript of the homily by Bishop Ned Schlesinger and closing remarks by Fr. John Connor, LC