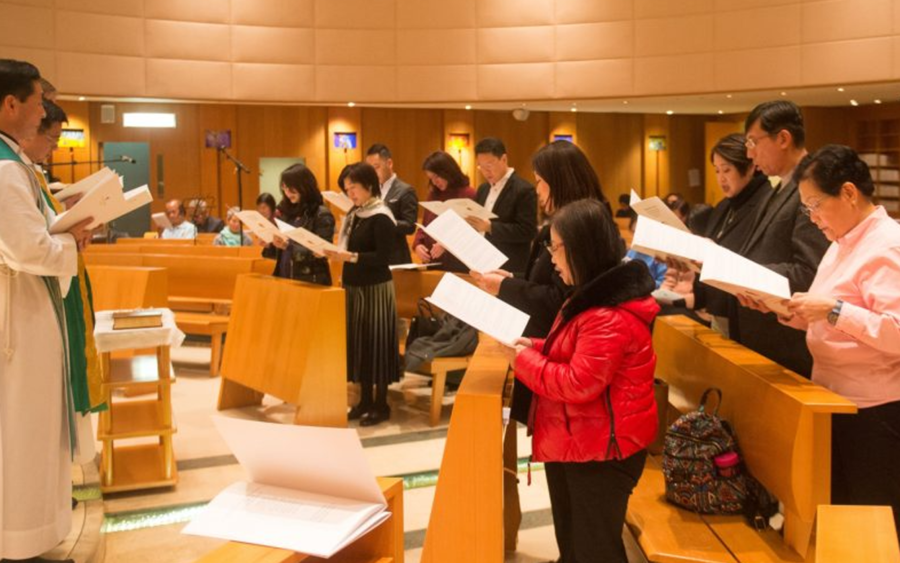 Several Legionaries and Lay Consecrated Men of Regnum Christi have been travelling to Hong Kong and China to work with the academic fields of bio-ethics and business ethics. On January 23, they had a special Mass celebrating the 10th anniversary of this work

In the last decade, several Legionary priests have given spiritual and academic conferences. In the academic field, courses on bioethics and business ethics have been offered. In the spiritual field, retreats and conferences about marriage and the Bible have been preached. In addition, they have come in contact with ecclesiastics, academics, and businesspeople.

Most of the Legionaries of Christ working in China have come from the community of professors in Rome. Ten lay people from Macao and Hong Kong attended the Mass of Thanksgiving on January 23, concelebrated by Fathers Joseph Tham, LC, Thomas Montanaro, LC, and Marco Cho, LC.

Fr. Marco Cho, LC, preached the homily on the Gospel passage of the man with the withered hand. He recalled that “Jesus wants to enter our lives to heal us.” Fr. Marco added, “Regnum Christi is, for us, the answer through which we give Christ the opportunity to enter into us, life, soul and heart. For us Regnum Christi is the answer to the vocation of love and the vocation to love.”

Hong Kong has over 7 million inhabitants, and Confucianism with ancestor worship is the predominate religion. Only 10% of the population practices Christianity. About half of those are Catholics. Fr. Joseph Tham, LC, explained Regnum Christi’s role: “The laity seek a deep formation and a stronger spiritual life, to be able to participate adequately in the ethical, social and political debates around them according to the Catholic faith.”

Since 2010, Fr. Joseph Tham, LC, a native of Hong Kong raised in Canada, has been a visiting professor at Holy Spirit Seminary College, where he periodically offers a curricular bioethics course. In addition, he has several assignments in the diocese as Fellow of the Bioethics Resource Center of the seminary, advisor to the diocesan commission for pastoral care for people with same-sex attraction and their families, and chaplain of the St. Justin Fellowship of Catholic Scholars.

Several legionary priests have also been able to visit and participate in conferences and retreats in mainland China. Some have accompanied Chinese pilgrims to the Holy Land, Poland, Spain, Italy and Greece as chaplains. Others have also accompanied Chinese young people in some of the World Youth Days since 2013. Also, several young people of Chinese origin have joined the Legionaries of Christ.

In the field of training and accompaniment of executives and other professionals, the legionaries have organized several retreats and meetings in Hong Kong, Rome and the Holy Land.

Fr. Joseph Tham, LC, spoke of how important their work is: “China is currently the second strongest economy in the world. There is no denying its influence for the future of the world and the Church. Its cultural and economic leadership has an immense weight. Although there is a complicated ecclesial situation, Hong Kong is presented as a bridge or as a gateway to China. Despite the cultural differences and challenges presented by Chinese culture, there is a warm welcome for our spirituality and the apostolic methodology of Regnum Christi. It seems that Providence acts in an unexpected way, opening new possibilities at this moment in our history.”

You can read the Spanish original on the Legionarios de Cristo website.