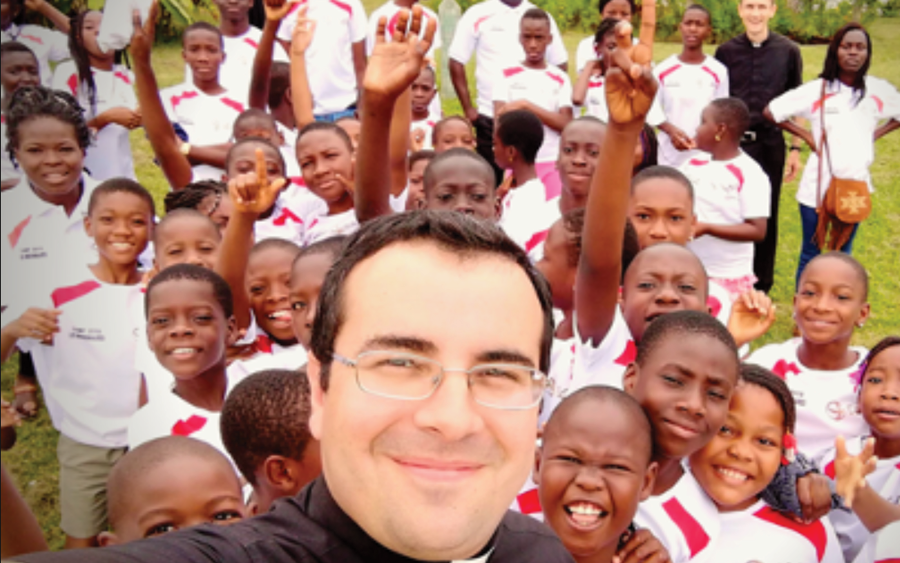 Fr. Alejandro Paez, LC, is originally from Monterrey, Mexico. He arrived in Ivory Coast as a result of a string of circumstances that seemed very simple but were undoubtedly guided by the hand of God.

Everything started with the initiative of a Consecrated Woman of Regnum Christi, who organized a group of Mexican girls to go on missions to the Ivory Coast, a country that was not new to Regnum Christi, around the end of 2016.

The missionaries were looking for a chaplain who could go with them, so they went to Fr. Carlos Gutierrez, LC, who was on the formation team at the General Directorate in Rome. Fr. Carlos was happy to accompany them on this special mission.

During a conversation with Fr. Alejandro while they were having a coffee together, Fr. Carlos realized he had to cancel the trip to Africa because it was at the same time as his annual spiritual exercises retreat. Fr. Alejandro’s curiosity prompted him to ask what the trip was for, and when he learned what they were going to do, he offered himself to go as the chaplain.

It will only be one trip to Africa 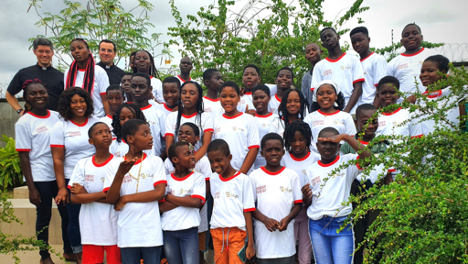 When Fr. Alejandro offered himself to go to Africa in Fr. Carlos’ place, in his mind, he was only going to go once. He could not imagine what the Lord would show him and what he was being called to begin.

Years earlier, Regnum Christi had been founded in this African country, but a series of events caused by the civil war and the passing of the priest who was involved in the missionary work in Africa led to a gradual shrinking of the Movement there until it had almost disappeared. During the Solemnity of Christ the King in 2016, when the much smaller RC section of Ivory Coast would have a Legionary of Christ present for the last time, they could only hope that the Legionaries could return in the future (an uncertainty at that point).

To their surprise, about a year after that goodbye, and thanks to the initiative of the Consecrated Woman bringing Mexican missionaries there, seven girls, two consecrated women, and Fr. Alejandro disembarked in July of 2017.

The group of missionaries arrived without knowing the history of the African section, but the enthusiasm that they had and the jerseys the missionaries wore that said: “Share Regnum Christi” were a sign for the people that saw them arrive that God wanted to continue inspiring this charism.

“It was very clear that the charism there was alive and flourishing.”

Fr. Alejandro returned to Rome with the desire to share what was happening in Ivory Coast and the need to accompany the vigorous community that had gone through so many challenges. In the end, he was assigned to this mission.

Founding ECYD in an African country 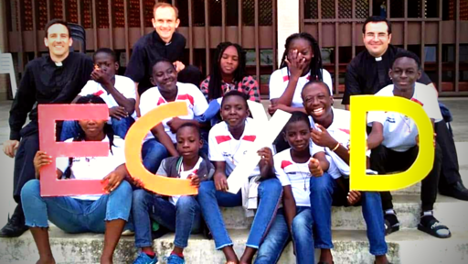 The Catholic Church has been an important driver of social development in Africa. The parish priests are builders and agents of change for communities. For this reason, the Church has the respect and love of the people. In this context, it was natural for ECYD to be born in the Ivory Coast, with the charism of Regnum Christi developing through a few very committed members with great apostolic zeal.

The members launched the first camp for kids, where they explained what ECYD was to them with the support of Fr. Melchior Poisson, LC, and the members of the locality. At the end of the camp, they proposed the Pledge of Friendship with Christ to the kids, and from that camp came out the first ten members of ECYD from the Ivory Coast. Now four of them are in charge of apostolates there.

Fr. Alejandro shared that what is fundamental is to establish the proper conditions for the charism to grow, and grow in Africa. “You must involve the youth so that they are the ones who lead the apostolates, always with the support of a formation structure that helps them to enter deeper into the way of doing things with the Regnum Christi charism. In addition to formation, the members need to experience helping at the camps and see how to carry out apostolic work with kids so that they feel naturally called to participate actively.”

“It is amazing to see how they exhibit a way of life that is unmistakably Regnum Christi and unmistakably African.”

During 2020 and the challenges of the pandemic, formation of the leaders continued long-distance. In 2021 they were able to start the camps and ECYD encounters again, where the youth receive formation and the sacraments, play games, and plan the apostolates that they are going to do.

Africa – the continent of hope

The Church looks at Africa with hope, and it would seem that this continent has not yet gotten used to the faith. Fr. Alejandro hopes that it won’t get used to it, since that can lead to indifference.

The first parish in Ivory Coast was founded in 1904, so the preaching of the Gospel and its effects are still very new, effects which Europe has already forgotten, like the dignity of the person and progress through the creative call of God to be fulfilled as persons.

“You can see growth in the communities where the Gospel has taken root.”

The faith in Africa is fresh and vigorous. This moves the people of Ivory Coast to share their love for the charism of Regnum Christi. In it, they see the potential to change their surroundings and themselves.

“Regnum Christi is an apostolic body, but also a spiritual family – a community.”

Being an apostle on mission 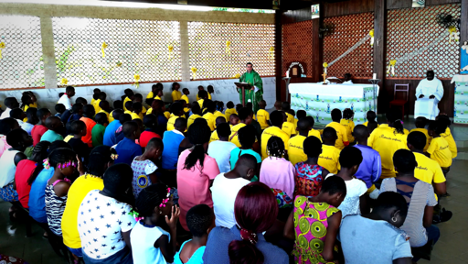 Fr. Alejandro recounts how when he was a student at the Apostolic School, one of his great dreams was to go and found Regnum Christi in another part of the world, but the dream remained just the wish of a boy with a missionary soul.

During his formation, he never imagined having the chance to develop this work of evangelization in Africa. He made his first trip to Ivory Coast just six months after being ordained a priest, and he thanks God for this special gift.

It has also been the perfect opportunity to focus on what is essential in bringing Regnum Christi to others and what is essential to the charism: helping people to have a real experience of Jesus Christ so that, in turn, they bring him to others.

Currently, Fr. Alejandro is combining his doctorate studies with visits to Ivory Coast for ECYD camps. Fr. Dain Scherber, LC, who was ordained just this past May 7th, is now accompanying the Regnum Christi section in this African nation.

Check out their website for information on how you can be a missionary on a Mission Youth mission to the Ivory Coast.

Translated from the original Spanish