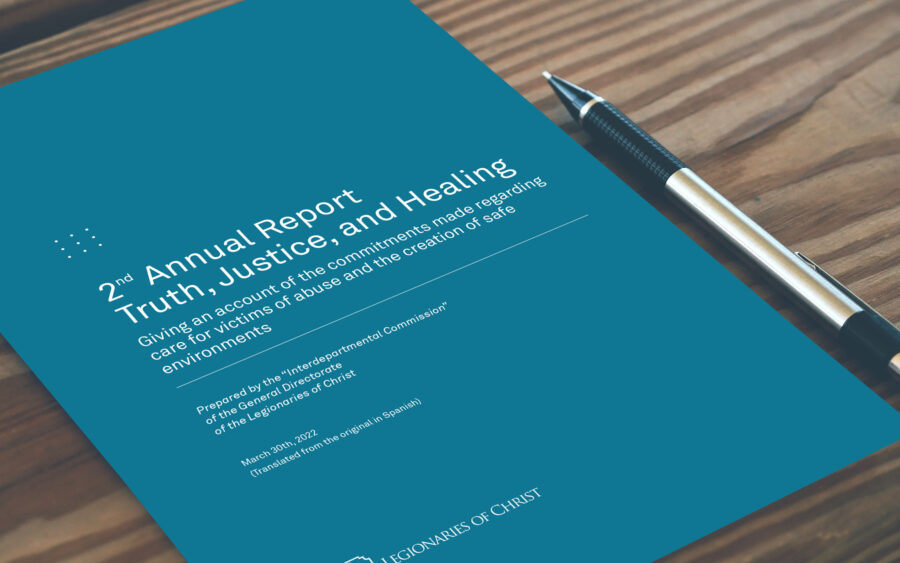 April 6, 2022 | Rome – The Legionaries of Christ give an account of their commitments to the victims of sexual abuse since the publication three years ago of all cases from their history. For the second consecutive year they present the steps that have been taken and the long-term international program of financial reparation that will take effect in 2022 in the 2nd Annual Report: Truth, justice, and healing. They are in a process of healing with 56 of the approximately 170 victims known to them throughout the world. For its part, Eshmá, an independent institution of specialists, cares for 20 of the victims.

Program of financial reparation for victims

The Congregation is aware that “no amount of reparation can compensate for or make the damage caused by abuse disappear,” but affirms in the 2nd Annual Report that “with care and accompaniment, it can help to alleviate, at least somewhat, the weight carried by those who bear this wound.”

In its commitment to foster pathways of reconciliation and healing, the Legionaries of Christ have created a program of financial reparation which will be offered to the victims through the professionals who are accompanying them, within the framework of a wider process of restorative justice that seeks to contribute toward the complete healing of the victims.

The program will consist of reparation committees made up of experts and survivors or their families, who will work independently and establish procedures and parameters that place the victim in the center and seek to avoid re-victimization. There are no conditions placed on the victims. It establishes four types of reparation: support for rehabilitation or therapeutic treatment, financial for the damage caused, subsidies for minimum vital sustenance, and other types of institutional helps like restorative encounters.

Listening to, receiving, and accompanying the victims

Furthermore, the Legionaries of Christ have proactively sought to reach out to victims and have begun pathways of healing with around 56 victims of the approximately 170 victims who are known to it throughout the world.

For its part, Eshmá, an institution that specializes in welcoming and accompanying the victims of sexual abuse, abuse of power and of conscience in the Catholic Church, at the time of the preparation of the 2nd Report, cares for 31 victims of members of the Congregation, 20 of whom made allegations of abuse that they suffered as minors. The identity of the individuals and the information regarding the abuses they suffered is only shared with the Congregation if the victims wish to share it.

In 2021, all the countries where the Congregation is present have implemented safe environment policies which are coordinated by one individual in each country, and are accredited or in the process of receiving accreditation by Praesidium, an external institution that specializes in the creation of safe environments for minors that follows the highest recognized international standards of prevention.

The Legionaries of Christ in the North American Territory have no new updates to the previously published list of members of the religious congregation who were active in ministry with substantiated sexual abuse allegations in the United States. All of the updated international data on the cases, documents, and reports, as well as the contact information of the independent institutional channels for allegations/claims can be found at 0abuse.org.

Accountability: Toward a culture of Zero Abuse in the Congregation of the Legionaries of Christ

Images for the press

North American Territorial Communications Office of the Legionaries of Christ