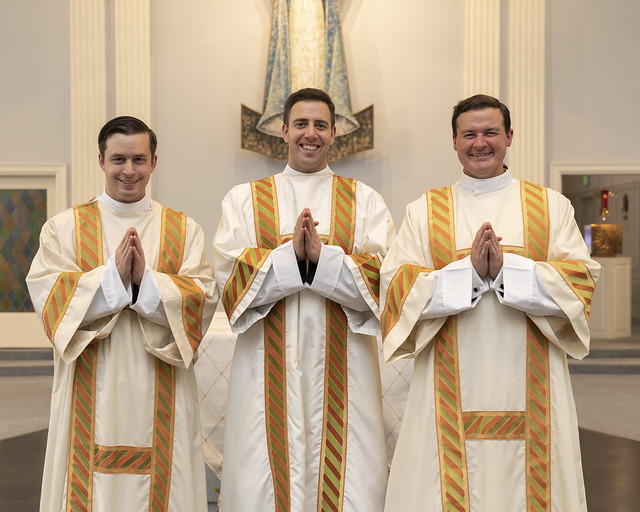 On Saturday, July 27, 2019, three Legionaries of Christ were ordained to the diaconate in Michigan City, Indiana.

Bishop Donald Joseph Hying ordained Deacons Kramer Cameron, Kevin Gills, and Christopher Gronotte, LC, in Notre Dame Parish during an 11am Mass. 47 Legionaries of Christ priests concelebrated the Mass of ordination. Along with the young men from Bishop Hying was the bishop of Gary, the diocese in which the ordination happened and which SHAS is part of, but he was recently transferred to Madison, WI.

These deacons are among the 30 Legionary Deacons being ordained in 2019. Here are the stories of how the three deacons got to this point. 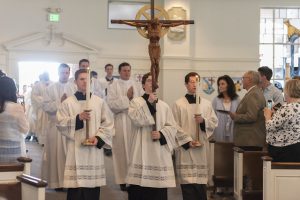 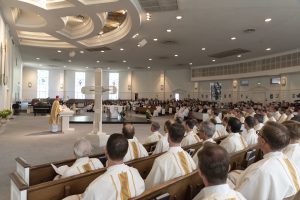 Deacon Kramer Cameron was born in the small town of Mabou, Nova Scotia, Canada and his family now lives in Calgary, Alberta, Canada. He has four living sisters and a brother who died a few months after he was born. Deacon Kramer spoke of his family, “My family is a real gift and though we are all over the world, we are really close. When God gives us the opportunity to be together, it’s always a little taste of Heaven on earth.”

Deacon Kramer entered the apostolic school at 13. He described his personal experience, “When I prayed about it, read the Scriptures, talked to Jesus in the Eucharist, went to the summer program in New Hampshire… God made it clear to me that he actually was inviting me to live my short life… to help everyone get to Heaven, as a priest.”

He realized that his life was short compared to eternity, and he felt that God was calling him to live it helping others realize that God loves them and get them to heaven.

Deacon Kramer mentioned how the unexpected death of Br. Anthony Freeman, LC, last year touched him, “It’s a reminder that we’re not just preparing to love Jesus or be apostles – we already are and it’s awesome. God can take us to Heaven whenever he wants, because we are already all his.”

Speaking about what the priesthood meant to him, Deacon Kramer said, “For me, my calling to the priesthood is simple: I’m just following Jesus. I’m primarily a disciple, I try to trust God and allow God to love me. I feel called to love him and all people with his heart and mercy, bringing others the greatest gift, his love.”

Regarding the diaconate itself, Deacon Kramer spoke about how he is working in Florence at the English-speaking parish in Florence, Italy called Santi Apostoli (Holy Apostles). As he is the sole native English speaker in the Legionary community there, he foresees a lot of opportunities to help with the sacraments and form apostles.

Deacon Kevin Gillis was really influenced by a book about Padre Pio that his mom gave him at 13. He was struck that Jesus did it all for him. He saw the need of souls to have real friendship with Christ like he had found. At 16, he visited the apostolic school and was impressed by the others there. He joined the apostolic school for a year and left for two years before returning for the novitiate at 19. He working in the San Jose area as a brother: working behind the scenes and offering Catholic formation at Canyon Heights Academy.

When asked about his ordination, Deacon Kevin said “[Diaconate ordination] means talking a step closer to the altar, taking on a greater call to holiness, and a greater opportunity to serve God’s people.”

Deacon Christopher was born and raised near Cincinnati in Fort Mitchel, Kentucky. He grew up in Regnum Christi with an older brother (Fr. Andrew Gronotte, LC) and a younger sister. His dad passed away unexpectedly in 2017. Deacon Christopher describes how he started out in the apostolic school in seventh grade: “When I first went to the apostolic school, I wasn’t thinking of being a priest, I just wanted to attend that school for boys up in New Hampshire and to be with my older brother.” He continued speaking about how his call was gradual, “Little by little, through spiritual direction and lots of time in prayer, I realized that I was really happy here in the Legion and that this is where God wants me.”

Deacon Christopher also described the contemplative and evangelizing spirit he lived in the seminary, “We wake up early to pray and fill the spiritual tank that will keep us running, to fill our candles with oil so our lamps don’t burn out. We have classes in the morning and study in the afternoon, a very regular lifestyle that allows for a certain healthy rhythm. There are many opportunities for time together with the other brothers and time with the Lord in adoration throughout the day.”

Please keep these deacons in your prayers as they prepare for priestly ordination which will take place in Rome on May 2, 2020.