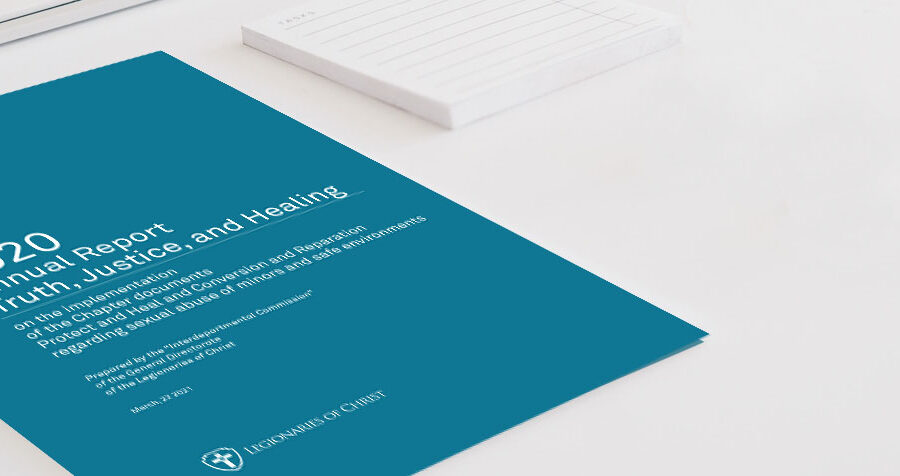 The report was the result of an extensive study carried out by an internal commission that, within the limits of a study of this nature, verified the various accusations of sexual abuse of minors throughout the history of the Congregation of the Legionaries of Christ. It collected the global statistics of cases of abuse by its priests between 1941 and 2019 and included an appendix with the steps taken to prevent future abuse and guarantee safe environments.

On the same day, Father John Connor, LC, then North American territorial director  and currently the general director of the Congregation worldwide, released a communication compiling the previously released names of Legionaries of Christ who were active in ministry with substantiated sexual abuse allegations in the United States into a list. (View list here.)

One month later, Father John again addressed the territory in a letter saying, “We must pray that these victims receive the healing they need and that those who are still trying to find the courage to come forward are able to find it. This is an important part of the healing process for victims and it’s important for the Congregation to listen to the experiences of victims so that we can make reparation and be further purified.”

In his letter, Father John also affirmed that facing our history with determination and helping victims heal is an important part of our mission as a Congregation, not a distraction from it. It is what God is calling us to at this point in our history. We are committed to transparency about the abuse that has been perpetrated by Legionaries of Christ, to working towards a culture in which all our priests deeply understand the effects of sexual abuse and their role as spiritual fathers dedicated to nourishing God’s people, and to helping those who have been harmed to heal from their wounds.

The 5th General Chapter of the Legionaries of Christ began a month after that report was released, and the Chapter Fathers gave priority to addressing this issue. “Conversion and Reparation” and “Protect and Heal” are the documents the General Chapter used to outline the Congregation’s path forward. They express a commitment to transparency which includes a communication policy for the publication of the names of Legionaries guilty of abuse of minors, and establishes sanctions for those guilty of failing to report or of obstructing the proper handling of sexual abuse cases.

As part of the Congregation’s ongoing commitment to help victims heal, prevent future abuses, and continue with the ongoing purification within the Congregation the Legionaries of Christ in the North American Territory are updating their list with four other cases. The Congregation also makes available the Legionaries of Christ 2020 Annual Report: Truth, Justice, and Healing, on the steps taken to care for victims and the development of safe environments. The Legionaries of Christ also published the individual cases of Legionary priests who have committed abuses in other countries. In the future, should more victims come forward with new allegations that are substantiated by third-party investigations, we will update the list. (View international lists here.)

Jeremiah Michael Spillane had recently decided to leave the Congregation and was working in the Diocese of Venice, Florida, when, in 1997, he was arrested charged and convicted for soliciting an undercover police officer posing as a teenager through an online chat forum. At the time, this case received media attention. He was dispensed of religious vows in 1998. The Legionaries of Christ have had no contact with Spillane in more than two decades.

Oscar Juan Turrión Pablos left the Legionaries of Christ and the priesthood in 2017. A statement regarding that situation was issued in October of 2017. In response to an allegation received in 2019, the Congregation commissioned Praesidium to investigate whether Turrión had sexually abused a student at Immaculate Conception Apostolic School, Center Harbor, New Hampshire (ICAS, since closed), when he worked there on the formation staff in the early 1990s. The closing of the school was unrelated. The investigation verified that the then-student had, at the time, reported the incident to ICAS’ rector and because of this, Turrión was immediately removed from his position. Still, he was allowed by the Congregation’s founder and general director to continue with his studies for the priesthood, was ultimately ordained in 2001, and was assigned to work with adults outside the United States.

When the issue of his appointment as rector of a seminary for future diocesan priests in Rome arose in 2014, the nature of the abuse was not sufficiently considered. When it resurfaced in 2019, the Praesidium investigation substantiated the allegations and their final report was accepted by the Congregation’s review board and territorial director. The Legionaries of Christ have apologized for the abuse and sought to aid the victim.

David Consoli was a seminarian in the Legionaries of Christ and served on the formation staff of Immaculate Conception Apostolic School, Center Harbor, New Hampshire, in the mid-1990s. He left the position in 1999 to continue his priestly formation, from which he later departed and returned to lay life. He was never ordained a priest.

In 2018, the Congregation received allegations of sexual abuse of students when Consoli worked at ICAS. A Praesidium investigation commissioned by the Legionaries of Christ verified the allegations and its final report was accepted by the Congregation’s review board and territorial director. The Legionaries of Christ have reached out to the victims with concern and support.

Father Timothy Meehan, LC, was ordained to the priesthood in 2000 and did not have pastoral assignments in the United States as a deacon or priest. In 2013, the Legionaries of Christ in the North American Territory received an allegation that Timothy Meehan had been involved in a sexual relationship with a person under his supervision while he served as an assistant formator in the Congregation’s United States novitiate in the mid-90s. This individual was under 18, but of the age of consent. A third-party investigation, by Praesidium, subsequently corroborated that the sexual relationship did exist during that period and was confirmed by both Meehan and the other party.

It was also confirmed that Meehan confided about the relationship and his repentance to his superiors in Rome who encouraged him to continue to priestly ordination.

In 2013, when this allegation surfaced in the North American Territory, Father Meehan was removed from his assignment as rector of the minor seminary in Italy. In 2017, he decided to leave the Congregation and become a member of the diocesan clergy. At the beginning of the transition process, the Legionaries of Christ informed the diocese about the above-mentioned incident and the restrictions.

In 2014, the then territorial director for the North American Territory intended to communicate this case publicly. The general director at the time took a different decision. New global criteria for the publication of abuse cases were established by the Legionaries of Christ’s General Chapter in 2020.

Upon the release of these new names Father Shawn Aaron, LC, the North American territorial director of the Legionaries of Christ, said, “I express my heartfelt apology to anyone who has suffered because of a Legionary’s sexual abuse or misconduct. There is no path forward except for penance, prayer and a never-ending commitment to hear with an open heart whenever someone has been hurt by one of our members.” He added that, “At our last General Chapter we made a firm promise to the Church expressed in the titles of its two documents: ‘Conversion and Reparation’ and ‘Protect and Heal.’ That’s our hope. By facing these issues with transparency, we desire to take another step to conversion, repairing the damage done, offering healing to victims, and striving to protect those we now serve. We have learned the importance of ensuring people in positions of authority are mature. Today this is a vital part of the formation of a Legionary. We pledge to continue working to improve.”  He also stated that “according to our current norms and policies any sexual relationship with a minor is considered abuse, which implies that a seminarian would have to leave the Congregation and would not be ordained a priest.”

Together with Pope Francis we say “Looking back to the past, no effort to beg pardon and to seek to repair the harm done will ever be sufficient. Looking ahead to the future, no effort must be spared to create a culture able to prevent such situations from happening, but also to prevent the possibility of being covered up and perpetuated. The pain of the victims and their families is also our pain, and so it is urgent that we once more reaffirm our commitment to ensure the protection of minors and of vulnerable adults.”[1]

If anyone has further information about cases listed above or others that involve Legionaries, they may contact: