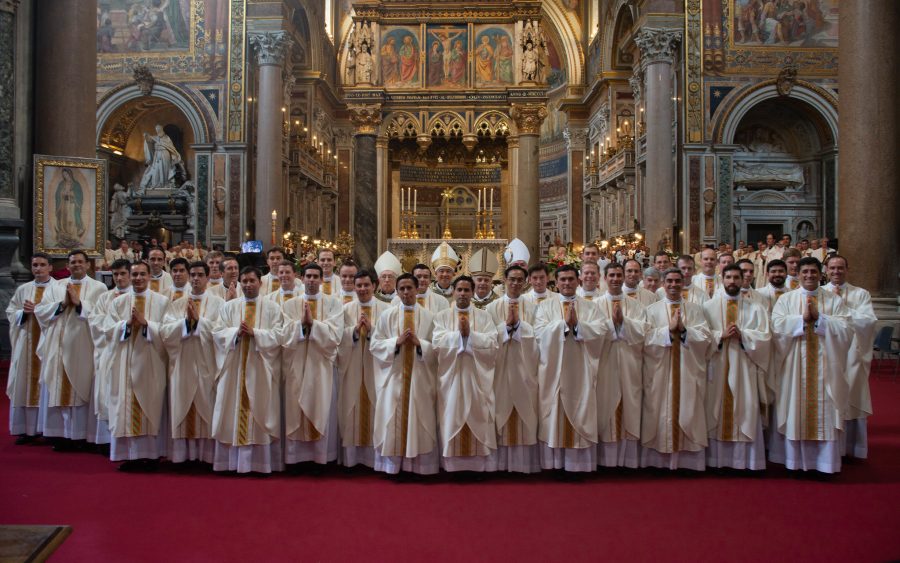 2. Approximately 2,000 people attended the ceremony in person and over 7,000 people tuned in to the livestreams available online, offered in both English and Spanish, on May 4, 2019.

3. Archbishop José Rodriguez Carballo, O.F.M., in speaking to the newly ordained priests, said “the priest, more than any other, must be considered a man of the people, for the people. Neither the lifestyle nor the language that he uses in the service of evangelization can separate him from the people…”

Rome, May 4, 2019 – Archbishop José Rodríguez Carballo, O.F.M., secretary of the Congregation for Institutes of Consecrated Life and Societies of Apostolic Life, ordained 37 Legionaries of Christ to the priesthood in the Basilica of St. John Lateran. The ceremony was attended by more than 2,000 people, including relatives, friends, fellow seminarians and formators. Father Eduardo Robles-Gil, LC, general director of the Legionaries of Christ and Regnum Christi, presented the candidates for ordination.

Archbishop José Rodriguez Carballo, O.F.M., stated that “the priest, more than any other, must be considered a man of the people, for the people. Neither the lifestyle nor the language that he uses in the service of evangelization can separate him from the people, not only because of his origin but also because of the special vocation he has received.” He also invited the ordinands to never forget that they are “called to serve. The Church needs servant priests, religious priests who always remain in the humble attitude of service. Remember that like Jeremiah the Lord today says to you: ‘I am with you’, do not be afraid. Make constant memory of all this, be a good Christian, a good religious and a good priest.”

Father Ignacio Sarre, LC, who until last year (2018) served as rector of the theology community at the General Directorate, comments: “It is a source of immense joy. They entered when the congregation was going through very difficult times, but they have believed in God’s call and believed that this work is theirs. Those of us who have known them up close have witnessed their struggle, their love, and how they are bringing new life-blood to the congregation in this beautiful moment of renewal. Full of satisfaction and hope, we know that now they are going to put what they have received and what they have lived through Regnum Christi at the service of many.”

Father Eduardo Robles-Gil, LC, general director of the Legionaries of Christ, comments: “Priestly ordinations are always very emotional, especially for the immediate family. The Legionaries of Christ are also a family and the birth of new priests is a great joy and a great hope. It is also a sign that God continues to trust in the Legionaries of Christ and in Regnum Christi and asks us to help him so that his Kingdom may be present in the hearts of all people and in society. It is a privilege and a very great obligation. For me as general director, it is very consoling to see religious, who I have known for several years, arrive at this moment. I congratulate them and their families and I ask that the graces of this day be extended throughout their priestly ministry. “

Names and countries of origin for the 37 new Legionaries of Christ priests:

The stories of the new priests can be read on the priestly ordinations’ website.

The Legionaries of Christ

Photographs of the ceremony (can be used giving credit to © LC Photoservice): Flickr

Full audio of the homily available in Spanish and English live streams.