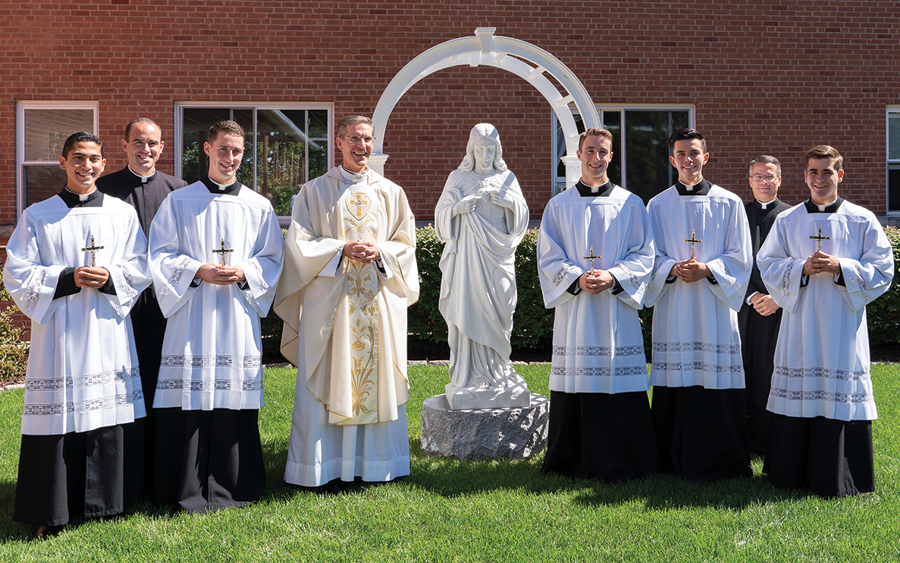 On September 5th, 2020, on the Feast of St. Teresa of Calcutta, five novices at the Legionaries of Christ’s Novitiate and College of Humanities in Cheshire, Connecticut, made their first professions of the vows of poverty, chastity, and obedience. For Br. Ricardo Gurrola, LC, Br. John Wilson, LC, Br. Eduardo Urdaneta, LC, Br. Elijah McLellan, LC, and Br. Raul Espinoza, LC,  Saturday’s profession marked the end of their two-year journey as novices who had left the path of the world and embarked on a new way of growing closer to Christ while discerning the next steps in God’s plan for them. As brothers who have made their professions, they are now officially considered members of the congregation in the eyes of the Church, and continue their journey of formation and preparation for the priesthood as humanists.

“During the novitiate the novices discern and delve into their vocation, they form a passionate love for Christ, and as time goes by, they acquire the virtues necessary for religious life.” Explains Fr. Joseph Brickner, LC, novice director, “Novitiate is like the three years that the apostles spent with Christ; listening to him, observing him, praying with him, and yes – even being challenged by him.  The first profession of temporal vows is the leaving of the boat and nets on the shore and responding to Christ who is saying, ‘Come, follow me.’”

Fr. Timothy Walsh, LC, rector of the Novitiate and College of Humanities, explains the meaning of the step the brothers have taken, “Professions is the day on which the young man commits his life entirely to God in an act of self-giving love. By professing the evangelical counsels (vows) of poverty, chastity, and obedience, he publicly expresses his desire to follow Christ more closely and be his disciple in a more committed way. In this sense, professions are the door into religious life in the Catholic Church.”

The brothers finished their two years of preparation for professions with an eight-day silent retreat, which was directed and preached this year by Fr. Emilio Diaz-Torre, LC, who lived and worked in the United States for many years before taking on a new assignment as territorial director in Monterrey, Mexico. He now lives and works in the newly established diocese of Cancun, Mexico.

On a practical level, the newly professed brothers will now be considered “humanists,” and will begin college level studies of humanities, including classical and modern languages, history, art, literature, and science. Fr. Timothy explained that within this context, they will each strive to become a man for the mission, and this will lead them along a path of discovering the human heart, starting with their own, especially by growing in self-knowledge. They will strive to put Christ at the center of their lives and the world around them by searching for the Lord’s presence in new ways and places. They will live out their mission through an ever-deepening identification with their individual religious and Legionary identity. This journey is made together, in company of the community of his fellow professed.

Explaining the link between professions and the preparation for the priesthood, Fr. Timothy states that “Through priestly ordination, a man is configured to Christ at the deepest level; he thus becomes an alter Christus, another Christ. Professions is a sort of “tilling the soil” of a young man’s soul which helps prepare him to receive this incredible gift.”

Number 18 of the Constitutions of the Legionaries of Christ explains it this way:

Legionaries, through the profession of the evangelical counsels of poverty, chastity and obedience by public vow,

1° consecrate themselves to God more intimately, following Christ who, virgin and poor, redeemed and sanctified the world by his obedience to the Father, even to the death of the cross;

2° seek to conform their hearts to Christ’s and make the Kingdom of God present in the world;

3° dedicate their entire lives consciously and eagerly to serve the Lord, the Church, the Congregation, Regnum Christi and all God’s children.

For each of the five brothers, all between the ages of 19 and 20 years old, the call of God that brought them to become professed brothers of the Legionaries of Christ is something they began to hear long ago.

Br. Ricardo Gurrola, LC from Los Angeles, California, shares that, “I don’t think there’s a moment in my life when I didn’t want to be a priest and I didn’t feel God’s call to be a priest. I always felt God calling me in simple little ways. When I was 12, I decided to join the apostolic school and really I kept saying my yes to God and taking the little steps he wanted me to take.”  For him, the act of professing the evangelical counsels is all encompassing.  He explains, “By making the vow of poverty I am telling God he is my only treasure. He is all that I want from this world. By making the vow of chastity I am telling him that he is my only love. By making the vow of obedience I am telling him that His will is my will, and it’s all I want to do in this life.”

Br. Raul Espinoza, LC,  of Paris, California, first heard God’s call through social media. “I ran into the Legionaries of Christ on YouTube, watching a Legionary priest talking about Mary.  The next suggested video was a Legionary priest speaking to married couples with such deep joy and depth of faith.”  Br. Raul started researching the order, and got in contact with Fr. John Curran, the Legionaries vocations director at the time.  A couple of months later, in 2018, he visited the seminary in Cheshire for a Test Your Call retreat, which was life changing for him, and he entered the candidacy program that summer. He explains his experience of making his profession of vows by sharing, “I found a treasure in the Legionaries of Christ, and now I am selling all that I have in order to take this treasure for myself.”

Br. John Wilson, LC, of Orr, Ontario, credits the parish priest he had growing up as a defining influence on his vocation through the way he reached young people with sports, joy, fun, and holiness. At 15, he visited Sacred Heart Apostolic School in Rolling Prairie, Indiana, and recalled that “while I was there, I had this powerful experience. Kneeling in the chapel before our Lord, I felt him almost drawing me towards the tabernacle with a simple, but profound call: Follow me.”  He entered the apostolic school and finished his high school there before entering the novitiate.

Born in Venezuela, then moving to Ft. Lauderdale, Florida as a teenager, Br. Eduardo Urdaneta, LC, found the desire to become a priest take root in him at 15, after being on retreat with the Legionaries of Christ. The retreat ignited a new life of prayer in him.  A month later he and his family moved to the United States. He remembers one night, not long after, when he was praying his rosary in the kitchen, reflecting on his life and thanking God for all his gifts. He felt the deep interior desire to give back to God, and experienced the call to give God his life as a priest. He feels a deep certainty about his decision to become a Legionary of Christ, stating “I grew up with this spirituality and I am passionate about the mission.”

Growing up in New Hampshire, Br. Elijah McLellan, LC, always thought he would join the army like his father. At one point, his parish priest asked him if he had ever considered the priesthood, and that opened him up to thinking about it. He visited the novitiate in Cheshire, and after a week of prayer and discernment, away from technology and distractions, he says he “felt a sure call to follow God in the priesthood.” To Br. Elijah, making his first profession of vows means, “to give my life to God, to totally abandon everything to God, and to hand my whole life and my total self to him.”

Fr. Shawn Aaron, LC, territorial director for the Legionaries of Christ in the Territory of North America, presided at the Mass and gave the homily.  His words were directed at the next steps that the brothers will take as they journey on in religious life.

Referring to the first reading from the book of Samuel, chapter 3:1-10, he told them, “There is a strange little phrase in the first reading, ‘Samuel was not yet familiar with the Lord.’ In a particular way from this point forward, everyone who encounters you must discover a certain hallmark in you of someone who is familiar with the Lord. They must encounter in you someone that they know has a relationship with the Lord, that listens to his voice, ponders his word, and adjusts according to his step”

Continuing with a reflection on the second reading from St. Paul’s letter to the Philippians chapter 3:8-14, he stated that “when we are familiar with the Lord it allows us to discern the value of things correctly.  Like St. Paul said, ‘I have considered all things and none of them compare to the surpassing glory of Christ, of knowing him, but more importantly of being known by him. He has grasped me. I am in his hands and he will never let me go.’” He wanted the brothers to clearly know that they will not earn heaven, that it is not a righteousness of their own making, but it is a righteousness, a holiness, that comes from faith in the Lord, from a particular way of setting their hearts on him alone,  and being conformed to his resurrection by way of being conformed to his death.

Concluding with words about the Gospel passage which described how a grain of wheat must fall into the ground and die in order to live and bear fruit, Fr. Shawn said that in being familiar with the Lord, being conformed to him, and being particularly conformed to Him in his death, a death that is an expression of love, and therefore a fruitful death, Legionaries must die daily to themselves. “In religious life, the fathers and brothers have to learn to say yes to things they don’t to say yes to, and how to say no to things they don’t want to say no to.” He echoed St. Paul’s words that “I learn how to let go of all things,” going on to explain that this means “not just the good things, but you even need to let go of the weaknesses and imperfections in yourself and in those around you.  In case you haven’t noticed, the Legion is not perfect, but it is an instrument of God. The Lord will work through it. I have to let go of the imperfections that I will sometimes see, knowing he is leading me to himself, even by way of the imperfect in me and around me. Because I have hope in the power of the resurrection I can die, because there’s a force that’s even more powerful at work by which Our Lord rose from the dead.  There is a love stronger than death. His death is the surrender of love. Love engulfs death, and because it does, it is fruitful.”

The Legionaries prayerfully invite all who would like to give a gift to support the newly professed brothers, and all of the Legionaries of Christ in formation for the priesthood, to consider doing so through a donation to the Novitiate and College of Humanities.

Anyone who would like to get to know the Legionaries of Christ and start discerning a potential vocation is invited to explore their discernment website and contact the congregation by email.

The full video of the Professions Mass is available here, and a collection of photos can be found here.

Below is a brief interview with the five brothers just before they made their professions.