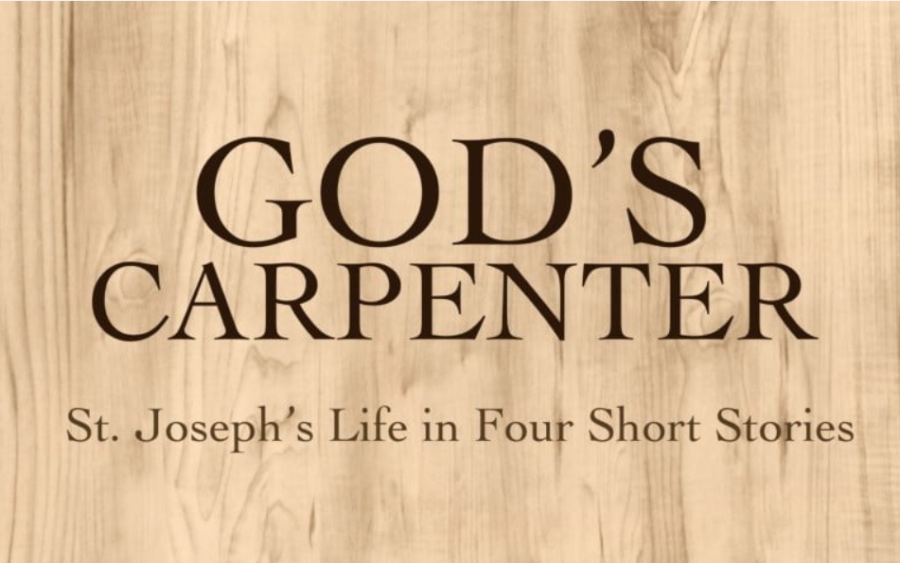 When, on December 8th, 2020, Pope Francis released an apostolic letter titled “Patris Corde,” (“With a Father’s Heart”), inviting Christians all over the world to develop and nurture a relationship with St. Joseph, Father Simon Cleary, LC, heard the invitation loud and clear. Having always had a fervent devotion to the saint, he knew that he wanted to do something special to bring others closer to his patron saint, particularly in this year specifically set aside for encountering and honoring the earthly father of Jesus. He just wasn’t quite sure what that something special might be. 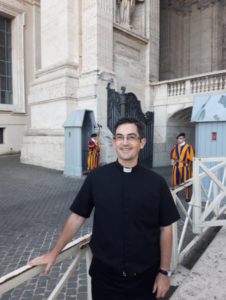 But one day, while Father Simon was contemplating the simple and holy life of St. Joseph, a scene formed in his head: St. Joseph wakes up suddenly in the middle of the night, an angel’s words still echoing in his ears, as has happened in his life several times before. “I was using my imagination to contemplate St. Joseph’s life,” says Father Simon, “and the small scene I pictured of his home life filled me with a consolation that I wanted others to experience, too.” It was then that Father Simon got the idea to write a book of stories that would bring detail to and animate the life of St. Joseph, a hard-working carpenter, a holy man obedient to God’s promptings, and a loving and devoted husband and father.

Father Simon made a call back home to New Zealand; while he was a student at the Legion of Christ’s minor seminary in New Hampshire, he had written two other short stories from the point of view of St. Joseph, which his mother had kept, and he had her send them to him at his new post in the Philippines. While these stories from his high school years needed, as Father Simon puts it, “total rewrites,” they provided a solid launchpad for what would become his newly published book – God’s Carpenter: St. Joseph’s Life in Four Short Stories.

One of the biggest obstacles Father Simon faced when writing the book was time, or lack thereof – he and his team were determined to have the book out in time for the Feast of St. Joseph, on March 19th. Writing a couple of hours every night after his other duties were completed, Father Simon was able to finish the first draft by January. Regnum Christi members helped him find both a copywriter and a professional illustrator to design the book’s cover, and with encouragement from the team of Father Shawn Aaron, LC, the book was released on Amazon on March 5th, with a couple of weeks to spare. “There was no time for perfectionism or other worries,” says Father Simon. “I could have done more stories, but in the end, I had four stories that I felt gave a good picture of who St. Joseph was by his actions, and by the family he loved.”

Father Simon hopes that in these four stories, readers will find a man whom they can truly get to know, and with whom they can really identify:

“For St. Joseph, Mary was the Blessed Virgin – but she was also the love of his life. Suddenly, Mary becomes not just celestial to us, but also kind and human. And Jesus is both God and also the small child that Joseph holds. He knows he’s not worthy to hold Jesus or to have Mary, yet he also knows that he’s supposed to be there. It’s like when we say ‘Lord, I’m not worthy to receive you’ right before communion, yet we know we’re supposed to come to communion.” 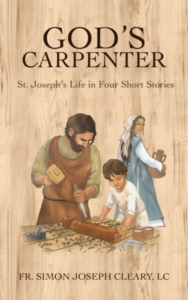 This is why it was important to Father Simon that the stories be told from the point of view of St. Joseph, the only member of the Holy Family ever to have sinned, and the only one who must have felt, from time to time, unworthy. “Standing alongside St. Joseph, we can let ourselves feel weak and sinful, but St. Joseph reminds us that we are also surrounded by Jesus and Mary’s greatness,” says Father Simon. “No, we’re not good enough, but yes, Jesus really wants St. Joseph – and you – to be there next to him.”

This is the true fruit that Father Simon hopes readers gain from reading the book – a new or renewed friendship with St. Joseph that will ultimately lead to an increased love for his earthly wife and adopted son. “I hope that people can become friends with St. Joseph, because I think he is someone we can all grow to like,” says Father Simon. “If you like St. Joseph, if you walk alongside him, he will take you inside the Holy Family’s home. He will show you his wife, Mary; he will point out Jesus. So that’s the goal: make friends with St. Joseph, and he will help you love Jesus and Mary a little bit more and in a new way.”

And Father Simon has already experienced the fruit of this himself! Even though he’s had a life-long devotion to and relationship with the saint (Father Simon was consecrated to St. Joseph before he was even born!), writing the book gave him new insight into his patron saint, and a new point of connection with him. “I’ve always felt a kind of holy envy towards St. Joseph – he’s quiet and a laborer, while I can talk too much, and the tool in my workshop is a keyboard, not a hammer,” says Father Simon. “Writing the book, I grew in a deeper realization that that doesn’t matter so much. St. Joseph struggled with wondering if he was up to the task God had given him, and I do too. St. Joseph loved Jesus and Mary as real people before he understood the mystery behind them, and I’ve always found that I love Jesus and Mary more when I see them as real people, telling them about my day.”

Father Simon hopes that the stories presented in the book, which imagine what St. Joseph must have felt when he met Mary for the first time, when he heard about her pregnancy, or when he first laid eyes on the infant Jesus, will invite readers into a more intimate understanding of a man who is quiet and humble and, quite often, goes unnoticed. The book also includes a section that answers some of the most intriguing questions regarding St. Joseph, like “Why did he initially want to divorce Mary?” and “Did Mary make a vow of virginity, and if so, did St. Joseph know about it when they were betrothed?” In addition, the book includes the Prayer to St. Joseph that Pope Francis shares in “Patris Corde.” 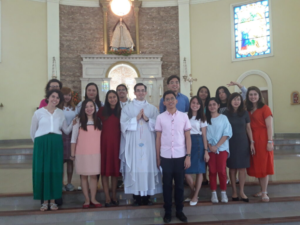 As a Legionary priest, Father Simon has served as a missionary in Mexico, Italy, the United States, and Nicaragua, and is currently the chaplain to Mano Amiga Academy in Paran͂aque, Philippines, a school that provides the quality education, training, skills-development and support that underprivileged families need in order to break out of poverty. “It’s a beautiful mission,” says Father Simon, “with a lot of challenges bringing Jesus to very poor families, trying to keep the school open despite the world’s longest continual lockdown, and learning a new language!” Father Simon is also part-time chaplain to Sacred Heart Academy of Pasig, and preaches retreats in the Philippines, Australia, and his home country of New Zealand.

Is there another book in Father Simon’s future? “We’ll see what God wants,” is his reply. “For right now, my main adventure is making the schools I serve at thrive, and helping families draw closer to God. I am a priest first, and being a writer comes in distant second. I’m happy to drop writing to answer a call from one of my flock.”

You can purchase a digital or paperback copy of Father Simon’s book, God’s Carpenter: St. Joseph’s Life in Four Short Stories, on Amazon. The cost for the e-book is only $0.99 USD, but it will be free from March 17-21, in honor of the Feast of St. Joseph. Any donations made through the sale of the book will go directly to Mano Amiga Philippines to help foster a child being educated with faith and dignity.