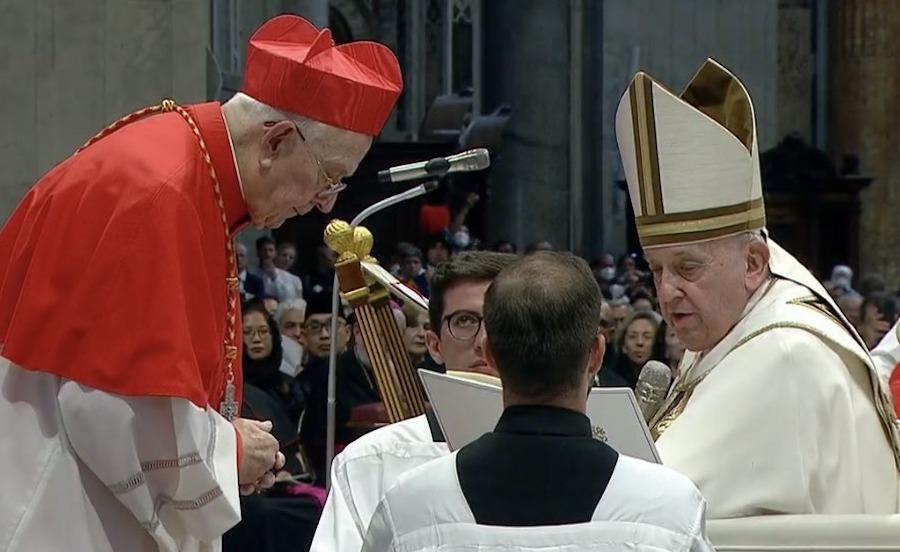 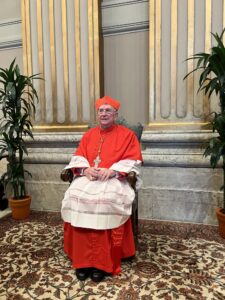 On the afternoon of Saturday, August 27, in Saint Peter’s Basilica, Pope Francis presided over the Ordinary Public Consistory for the creation of 20 new cardinals. Among the list of new cardinals was Msgr. Gianfranco Ghirlanda, SJ, who accompanied the process of revision and renewal of Regnum Christi, and Msgr. Fernando Vérgez Alzaga, the first Legionary of Christ created Cardinal.

In his homily, the Holy Father chose the images of fire and baptism, based on the Gospel of Saint Luke (“I have come to bring fire on earth, and how I wish it were already burning!”), for his reflection during the Ordinary Public Consistory. Pope Francis invited us to meditate on the two forms that the symbol of fire assumes – both a blazing column and long-burning charcoal embers, and in light of them, to pray for the cardinals, “who precisely in this celebration receive the dignity and the task the role entails,” he affirmed.

Pope Francis continued, “to us who in the Church have been chosen from among the people for a ministry of particular service, it is as if Jesus is handing us a lighted torch, telling us: “Take this; as the Father has sent me so I now send you” (Jn 20:21). In this way, the Lord wants to bestow on us his own apostolic courage, his zeal for the salvation of every human being, without exception….This is the same powerful fire that impelled the Apostle Paul in his tireless service to the Gospel, in his “race”, his missionary zeal constantly inspired by the Spirit and by the Word. It is the fire, too, of all those men and women missionaries who have come to know the exhausting yet sweet joy of evangelizing”

Turning to the fire symbolized by charcoal embers, the Holy Father continued, “This fire burns in a particular way in the prayer of adoration, when we silently stand before the Eucharist and bask in the humble, discreet and hidden presence of the Lord. Like that charcoal fire, his presence becomes warmth and nourishment for our daily life.” He later added, “Dear brother Cardinals, by the light and in the strength of this fire walk the holy and faithful people from whom we were taken – we, taken from the people of God – and to whom we have been sent as ministers of Christ the Lord. What does this twofold fire of Jesus, a fire both vehement and mild, say in a special way to me and to you? I think it reminds us that a man of apostolic zeal is impelled by the fire of the Spirit to be concerned, courageously, with things great and small…. A Cardinal loves the Church, always with that same spiritual fire, whether dealing with great questions or handling everyday problems, with the powerful of this world – which he often has to do –,or those ordinary people who are great in God’s eyes.”

After the homily, the Pope pronounced the formula for the creation of the cardinals, who swore fidelity to him and his successors “until bloodshed.” One by one, they approached the chair of the Holy Father, kneeling to receive the symbols of the cardinalate: the red skullcap, the birretta, the ring, and the bull with the assignment of the title or diakonia. Pope Francis also conferred the title of Archbishop on Cardinal Vérgez.

In a recent publication of the Vida Nueva magazine, Cardinal Vérgez stressed that “being the first Legionary Cardinal means an even greater responsibility for all of [the congregation’s] members.” Cardinal Fernando Vérgez Alzaga will continue to carry out his work in the Roman Curia, where he is president of the Governorate of the Vatican City State and president of the Pontifical Commission for that state.

As a personal reflection, Cardinal Vérgez emphasized that he did not expect the appointment: “The first thing I felt was gratitude to God and the Pope for the trust he placed in me. I have a responsibility to bear witness to Christ more enthusiastically,” he stressed. 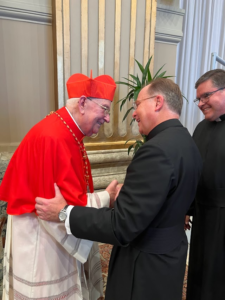 After the ceremony, Fr. John Connor, LC, congratulated Cardinal Vérgez on behalf of all of Regnum Christi, and in a note sent to all the Legionaries of Christ, Fr. Aaron Smith, LC, international director of the Communications Office, said that “as a religious family we are happy for our brother Msgr. Fernando Vérgez, LC, president of the Governorate of the State of Vatican City, whom Pope Francis made a cardinal during the consistory today.”

Pope Francis also elevated Father Gianfranco Ghirlanda, SJ, as a new cardinal.  Father Ghirlanda, a canon lawyer, has served as rector of the Gregorian University in Rome as well as being a member of the Dicastery for Laity, Family, and Life.  His close accompaniment of Regnum Christi spanned almost a decade, beginning with his assistance to the Legionaries of Christ as an advisor to Cardinal Velasio de Paolis in 2010 under the direction of Pope Benedict XVI. 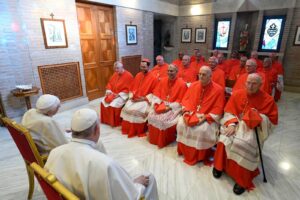 Following the Consistory, as has become a tradition, Pope Francis together with the 20 new cardinals paid a courtesy visit to Pope Emeritus Benedict XVI.